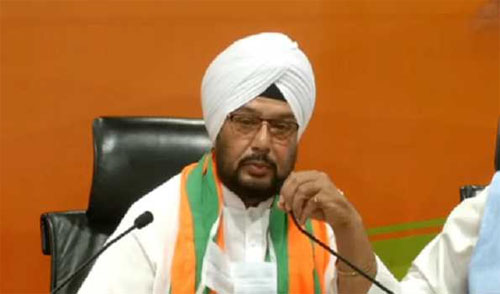 New Delhi Sep13 (UNI) Inderjeet Singh, the grandson of former President of India Giani Zail Singh on Monday formally joined the BJP, ahead of Assembly polls in Punjab next year.

Union Minister Hardeep Singh Puri handed over the party membership to Inderjeet Singh in the presence of National General Secretary, Dushyant Gautam and other senior leaders at the party headquarters in New Delhi.

Inderjeet Singh, has been working for the Vishwakaram community.

Welcoming Inderjeet Singh into the party Hardeep Singh Puri said, “You are welcome into the world largest party,”

He said, “His entry will assure the implementation of social schemes in Punjab, which were languishing due to petty politics.

On the occasion several of his supporters also joined the BJP.

Making the initial remarks after joining the BJP, Inderjeet Singh said, “The way Congress party had treated my grandfather despite his loyalty, it was my grandfathers desire that I should join the BJP not the Congress,”.

“From the last three-four years I have been working for Vishwakaram community and their upliftment in the country,” he said.