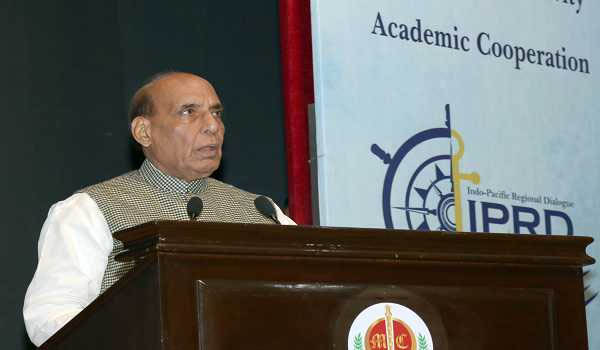 Defence Minister Rajnath Singh will co-chair the Dialogue in the afternoon with his French counterpart Sebastien Lecornu who is on a visit to India.

This is the first visit of Sebastien Lecornu to India as French Minister of Armed Forces.

"On board INS Vikrant, the Indian Navy's newest aircraft carrier, designed and manufactured in India. France and India are united in their desire to defend their maritime sovereignty and guarantee freedom of movement at sea in the Indo-Pacific," Lecornu said in a tweet.

The French Minister of Armed Forces is also scheduled to lay wreath at National War Memorial on Monday. He will, thereafter, be accorded Tri-Service Guard of Honour in the presence of Defence Minister Rajnath Singh at Sushma Swaraj Bhawan, Chanakyapuri here.

"As part of our Annual Defence Dialogue, Lecornu will hold wide-ranging talks with his counterpart Rajnath Singh, spanning all aspects of our defence cooperation, including operational defence ties, counter-terrorism, maritime security in the Indo-Pacific, and industrial and technological partnerships in line with India’s Aatmanirbhar Bharat policy," the Embassy of France informed.

The French statement further stated that Lecornu, during talks with External Affairs Minister Dr Jaishankar, will discuss global issues of common concern, including the situation in Europe and in the Indo-Pacific, and will convey France’s full support for India's Presidency of the G20, which is beginning on December 1.

India and France have close and friendly relations. In 1998, the two countries entered into Strategic Partnership, marking convergence of their views on a range of international issues apart from a close and growing bilateral relationship.

India and France are partners in defence and armaments, contributing to India’s policy of strategic autonomy in the defence sector through numerous industrial cooperation.

The French Minister's visit to India reaffirms France's engagement in the Indo-Pacific and India’s centrality in the French strategy for the region, the French statement added.