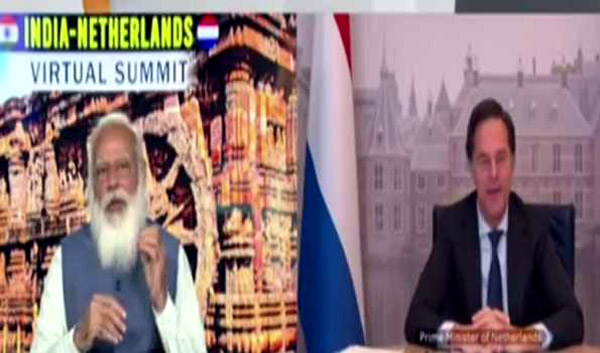 New Delhi, Apr 9 (UNI) Prime Minister Narendra Modi on Friday said the post-Covid world will throw up new opportunities that India and the Netherlands would work together and strengthen the relationship.
"I have complete faith that in the post-covid world, some opportunities will come up to the fore, where like-mided countries like ours can build bilateral cooperation," Modi said in course of a virtual summit he held with his Netherlands counterpart Mark Rutte.
"We will get to talk about many new opportunities during the COP26 and India-EU summit," said Modi.
The prime minister said that the approach of the two countries towards global challenges like climate change, terrorism and pandemic is similar. The two sides are building convergence in new areas such as Indo-Pacific, resilient supply chains and digital governance. "Our strategic partnership on water will give this a new dimension," he added.
Both countries have wide ranging cooperation including in areas of agriculture and food processing, healthcare, smart cities and urban mobility, science and technology, renewable energy and space.
The Netherlands is the third largest foreign investor in India.
Modi said that establishment of fast track mechanism for investment promotion will give new momentum to the robust economic cooperation between the two countries.
Rutte thanked Modi for India's support to Dutch investors and two-way trade during the pandemic.
There are over 200 Dutch companies present in India with a similar presence of Indian businesses in the Netherlands.
The Netherlands is one of India's top 10 trading partners in terms of volume.
The two leaders also exchanged views on the regional and global issues of mutual interest.
Rutte said For EU, India is a crucial partner both in the region and the world at large. He supported India's bid for a permanent seat at the UN Security Council, saying that "India is an obvious candidate for a permanent seat in an expanded Security Council."
He also praised India's Vaccine Matri programme.
The summit follows the recent victory of Prime Minister Rutte in the parliamentary elections and will sustain the momentum in the bilateral relationship provided by regular high-level interactions, said the Ministry of External Affairs.
The Netherlands is home to the largest Indian diaspora in continental Europe.