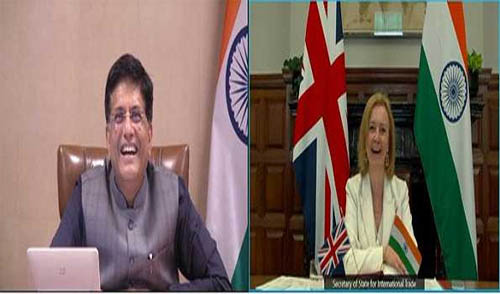 New Delhi, Sep 14 (UNI) Agreeing to start negotiations for proposed free trade agreement (FTA) by first week of November, India and the UK have decided to sign an interim pact by March, 2022 allowing both the countries to harvest early gains in some select commodities and services.
A comprehensive FTA would be concluded later.
Commerce and Industry Minister Piyush Goyal on Tuesday said that an Interim Trade Agreement, as a first step of an FTA, would allow both sides to immensely benefit from the early gains of the partnership.
"In services, certain services of mutual interest may be included in the Interim Agreement through request offer approach wherein we may include priority sectors which are immediately deliverable. If necessary, we may also explore signing of few Mutual Recognition Agreements in selective services like nursing and architecture services," Goyal said.
The proposed FTA between India and the UK is expected to unlock 'extra ordinary' business opportunities and generate jobs. Both sides have renewed their commitment to boosting trade in a manner which benefits all.
"India is committed to the early conclusion of an ambitious, comprehensive and mutually beneficial India-UK FTA with an early harvest agreement within an expedited time-frame," the Minister said.
Piyush Goyal discussed FTA matters with his British counterpart Secretary of State Elizabeth Truss.
The Minister said that there is keenness to have an early conclusion of negotiations for quick and early economic benefits to businesses on both sides.
He added that substantial work has already been done and extensive stakeholder consultations have been held involving industry bodies, export promotion councils, regulatory bodies and government departments among other stakeholders.