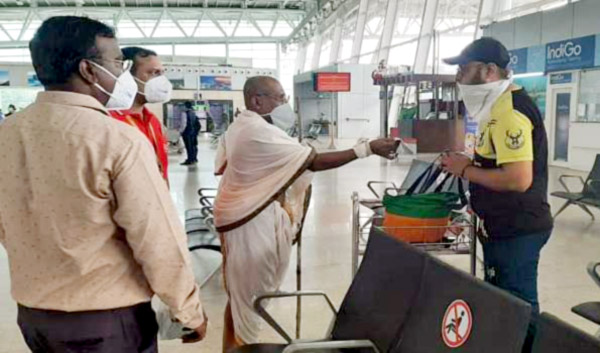 New Delhi, Oct 29 (UNI) After a lull of a couple of days, the Novel Coronavirus again made its presence felt strongly in the country, by infecting around 50,000 people in a single day!

On a positive note, the world's second-most populous country has reported fewer than 60,000 cases and 1,000 deaths for 11 straight days.

Fatalities due to the pandemic have now mounted to 1,20,527 till date across the nation, after 517 more lives were claimed by the highly contagious virus since Wednesday.

However, active cases have come down further by 7,116 since past one day and the number now stands at 6,03,687. In percentage, the active cases now stand at 7.51 per cent, discharged cases now at 90.99 per cent and the fatalities at 1.50 per cent of the total case count of the country so far.

According to the Indian Council of Medical Research (ICMR), there were 10,75,760 samples tested for COVID on Wednesday, whereas till date the total number of COVID tests conducted now stand at 10,65,63,440.

One crore tests were conducted in the last nine days. The daily positivity rate stands at 4.64 per cent.

Of the freshly reported deaths, Maharashtra accounted for 91 of the day's fatalities followed by 60 from West Bengal, 55 each from Chhattisgarh and Karnataka, 40 from Delhi, 35 from Tamil Nadu, 27 from Kerala, 20 from Punjab and 18 each from Andhra Pradesh and Uttar Pradesh.

French President Emmanuel Macron on the other hand had announced a second nationwide lockdown until at least the end of November.

In a televised address to the nation Mr Macron said, the new lockdown comes into effect from Friday, wherein people would only be allowed to leave home for essential work or medical reasons.

Russian President Vladimir Putin on Thursday said Russia is planning to start mass vaccinations of it COVID-19 experimental vaccine by the end of the year as it is proven to be effective.

As Delhi on Wednesday recorded more than 5,600 Covid-19 cases for the first time since the pandemic broke out, people have started to panic as approaching winter season could be proven ominous to the people of Delhi as the third wave of coronavirus outbreak could very well have set in already.

Delhi Health Minister Satyendar Jain on Thursday, however, said that it is too early to state that with conviction, but it could possibly be true.

“It is too early to say that Delhi is experiencing the third wave of Covid-19 cases. We must wait for another week in order to definitively say that, but it’s possible that we are already in that phase,” Jain said.

The World Health Organization (WHO) declared the COVID-19 outbreak a pandemic on March 11. Till date, more than 44.79 million people have been infected with the coronavirus worldwide, with over 1.17 million fatalities. Exactly 13 days later, India announced a stringent 21-day nationwide lockdown from March 25, however, as the cases kept rising, the lockdown was extended till May 30 after which the restrictions were gradually lifted in order to revive the battered economy.

Even as the globe is battling the pandemic with full vigour, all hopes are pinned on a potential vaccine, hope for which has risen post Serum Institute of India chief Adar Poonawala's claim that a vaccine could be ready as early as December and the first batch of 100 million doses could be available by the second or third quarter of 2021.