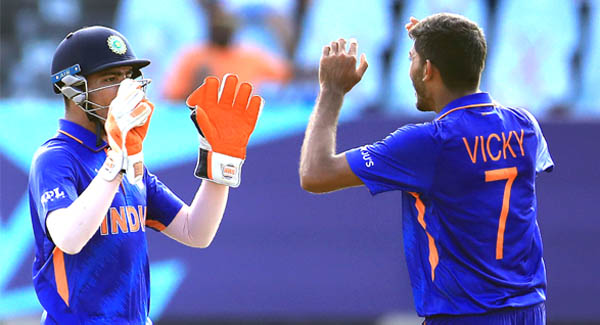 Guyana, Jan 16 (UNI) Captain Yash Dhull and left-arm spinner Vicky Ostwal outlined their ICC U19 Men’s CWC with eye-catching displays that helped India to get their campaign off to a thumping start with a 45-run win over South Africa here on Saturday.

Though India were bowled out for 232, they managed to win comfortably in the end. South Africa got off to a good start, with putting 55 on the board after 11 overs for just one wicket, but fell short.

The South Africans lost the game in middle overs, though Dewald Brevis was batting beautifully. They were strangled by spin on a pitch where the ball was gripping. Ostwal, Nishant Sindhu and Kaushal Tambe hardly gave anything away.

South Africa could muster only 64 from 12th to 31st over and the pressure sparked a collapse.

It was Ostwal who did much of the damage, finishing with figures of 5/28 off his ten overs. Raj Bawa also chipped in with 4/47 as the Providence crowd looked set to enjoy a thrilling finish with South Africa requiring 100 runs to win with seven wickets in hand and more than 15 overs remaining, but the fall of the dangerous Dewald Brevis (65) triggered a collapse as the Proteas lost six wickets for 27 runs to put the kibosh on their run-chase chances.

Earlier, India got to 232 riding high on Dhull's knock of 82 from 100 balls and Kaushal Tambe's a crucial 35 from 44 balls at the death. Only a mix-up between the wickets denied Dhull the century that he deserved after a fine knock to anchor his side’s innings.

The Delhi lad has scored three half-centuries on bouncy pitches, with this innings following 50s against Australia and the West Indies during the warm-up matches, he looks well-set to dominate this tournament with the bat.

The hero for India was Dhull in batting, for South Africa it was Brevis. Nicknamed ‘Baby AB’, it was not hard to see why he has been labeled so when he heaved a monstrous six to get to his half century in an impressive innings.

After arriving at the crease with the score at 40 for two, wicketkeeper Cox compiled a superb 111 not out off 113 balls to haul his team up to a total of 236 for nine.

Two wickets apiece for Juma Miyaji, Pascal Murungi, Joseph Baguma and Matthew Musinguzi sought to reel the Irish in but ably assisted by Philippus le Roux (32), Cox put his team in a commanding position at the interval.

Ugandan captain Pascal Murungi offered the underdogs a consistent glimmer of hope in the run chase but his knock of 63, bolstered by bowler Juma Miyaji’s blockbuster 38 at No.9, proved insufficient in causing a Group B upset.

Left-arm spinner Matthew Humphries – who opened the bowling for Ireland – starred with the ball for Tim Tector’s team as his four wickets for just 25 runs helped halt the Ugandan momentum and cap a 39-run triumph.

In another match, Canada battled admirably in Basseterre but were unable to haul themselves to victory as UAE’s first innings score of 284 for seven proved enough.

Ali Naseer’s destructive 73 off just 50 balls did the damage for Alishan Sharafu’s side after Punya Mehra’s well-judged 71 had put the wheels in motion for a strong first innings total.

And then came all-rounder Naseer’s late innings pyrotechnics, as his brutal knock – at a strike rate of 146 – catapulted his team to a sizable total.

Mihir Patel’s Canada rallied, however, with the captain leading from the front as his fine innings of 96 off 105 balls kept them continually in contention.

Zimbabwe had too much firepower for Papua New Guinea as captain Emmanuel Bawa’s first innings century propelled them to victory in Port of Spain.

The Zimbabweans racked up a formidable total of 321 for nine from their 50 overs before a polished all-round bowling performance completed a comprehensive 228-run victory.

Papua New Guinea bowler Junior Morea dismissed opener Steven Saul early on but after Bawa entered the fray at 15 for one, he never looked back as his majestic hundred – off just 95 balls – helped haul his team to a match-winning score.

Bawa and David Bennett (58) compiled a century stand for the third wicket while opening batter and wicketkeeper Panashe Taruvinga (36), along with Victor Chirwa and Connor Mitchell – who both scored 35 – also made contributions.

And Barnabas Maha’s team never got going in response, with no batter mustering more than 15 runs as the wickets were shared equally among the Zimbabwean attack.

Ngenyasha Zvinoera, Brian Bennett and Victor Chirwa all took two scalps apiece as Bawa’s side bowled the underdogs out with 15 overs remaining to crank up for Monday’s clash with Pakistan in perfect fashion.