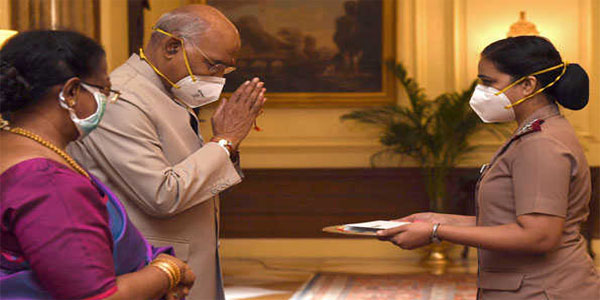 'Rakshabandhan', signifying the undying love and affection between a sister and a brother, usually celebrated with religious fervour and enthusiasm across the country, turned out to be a low-key affair in the wake of Coronavirus pandemic.

Most of the people were seen celebrating it either virtually or within the confines of the house to avoid the spread of the virus.

Women tied colourful 'Rakhis' on the wrists of their brothers, binding them in an inseparable bond of affection and love. In turn, brothers made a traditional pledge to protect them from evil and misery. At some places, the women demonstrated secular culture by tying Rakhis on the wrists of the men of other faiths.

People preferred to remain indoors and refrained from going out to buy gifts and sweets. At some places, small queues of people, diligently following social distancing, were seen buying Rakhis at stalls. Sweet shops made a sluggish business on the occasion.

Several prominent leaders took to social media platforms to wish the citizens on the occasion.

President Ram Nath Kovind and Prime Minister Narendra Modi expressed their 'greetings' early in the morning. Mr Kovind said that Rakhi is the sacred thread of love and trust that connects sisters with brothers in a special bond.

The Prime Minister, too, used his Twitter handle to greet the people on the occasion. "Many wishes to all the countrymen on the holy festival of Raksha Bandhan," PM wrote in Hindi.

Vice-President Venkaiah Naidu, in an article written on Facebook, said that it has been a specialty in Indian social philosophy that special importance is given to family and family values ??and tradition, there is a special significance attached to them.

Congress leader Rahul Gandhi tweeted both in Hindi and English to express his greetings. In his tweet, Mr Gandhi posted a photo along with his sister Priyanka Gandhi Vadra, the Congress General Secretary In-Charge of Eastern Uttar Pradesh. She, too, responded saying that having a brother like him (Rahul) is a matter of pride and she is fortunate that she has a brother like him.

Meanwhile, in a unique initiative of the Punjab Jail Department, the ‘Raksha Bandhan’ was observed in the jails. Although owing to the spread of corona virus, the family members of the jail inmates could not meet their dear ones but due to the novel efforts of the department, the packets sent by the family members of the inmates were delivered to the latter in a prompt manner. The jail department had also arranged for ‘Mishri’ at their own level because of ban on bringing sweets.

Down south also, the festival was celebrated in some unique ways.

Telangana Governor Dr Tamilisai Soundararajan felicitated the plasma donors with the rakhis,sweets,and shawls and hailed them as the saviours of lives. The celebration organised at the iconic Darbar Hall at the Raj Bhavan witnessed the participation of 13 plasma donors, who shared their experiences of fighting Covid-19 and how they got motivation to donate plasma to save other patients with the Governor.

Moving to the east, the sisters of Prajapita Brahma Kumaris tied rakhi to Assam Governor Prof. Jagdish Mukhi at Raj Bhavan. The Governor, in his message, said this age old tradition of tying thread signifies a special bond between brothers and sisters and symbolises an auspicious thread of love and trust. He hoped that the pious occasion of Raksha Bandhan would strengthen the bond of relations and the commitment to dignity of women.

The authorities -- pan India -- took adequate precautions to maintain social distancing of people at shops and deployed police personnel to strictly adhere to the lockdown restrictions. No untoward incidents were reported from any part of the country.