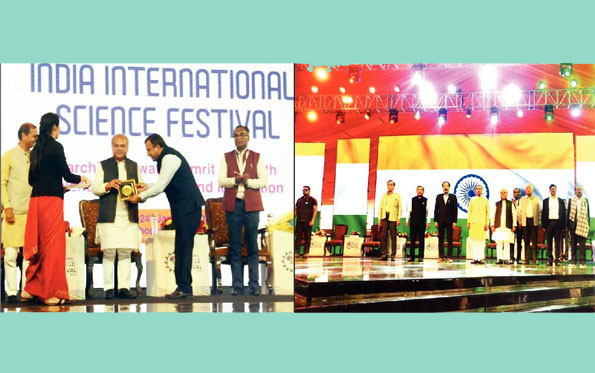 Chronicle Reporter, Bhopal
The International Science Festival concluded on Tuesday at Manit in the capital Bhopal. This was the eighth edition of the science festival. Union Agriculture and Farmers Welfare Minister Narendra Singh Tomar participated in its concluding session. He said, "Lal Bahadur Shastri, who was the Prime Minister of India, had given the slogan 'Jai Jawan, Jai Kisan'. After him, Prime Minister Atal Bihari Vajpayee added science to it. Jai has also linked research with science."
ISRO Chairman and Secretary, Department of Space Science, Dr. S. Somnath has expressed hope that very soon India will take a big leap in space tourism. He said that the era of space tourism has started in some big countries of the world. India has achieved self-sufficiency in the field of space science by sending satellites of other countries into space through indigenous rockets from its own soil and space tourism is about to start. He also informed about the Gagan Yan being sent into space this year.
In the Face-to-Face with New Frontiers in Science program of the India International Science Festival, Dr. S. Somnath listed many achievements during the lecture. He was delivering a lecture on the topic 'Moving towards Amritkal with technological progress in the frontier area of space'. He informed that a tourism vehicle is being constructed for space tourism. This vehicle is being made with the help of private companies. 6 crores will have to be spent to enjoy the journey in space.

Methane will be used as fuel
Dr. Somnath said that methane gas will be used as fuel to send spacecraft in future and for this new engines are being manufactured. Methane will also be used in the vehicles sent to the Moon and Mars. Actually it is the fuel of the future, the use of which will be beneficial in many ways.
Dr. Somnath, while discussing the gradual development journey of India's space science program, said that the aim of the research done in space science has been for the betterment of the human society. Many important programs have been started under geo spatial e-governance. He told that Gagan Yan will be sent into space this year itself. Referring to the strategic uses of space science, he said that future warfare would be computer controlled. Dr. Somnath said that many projects have been included in the Science Mission.
Dr. Somnath said that the roadmap for space science for the next 25 years has been prepared keeping in mind the concept of self-reliant India and the Amrit Kaal.
The program was coordinated by RGPV Vice Chancellor Dr. Sunil Kumar Gupta. The guest of honor was Suhas Joshi, Director, IIT, Indore. A large number of school children were present to listen to the lecture.