India is fully determined to protect its maritime interests: Rajnath 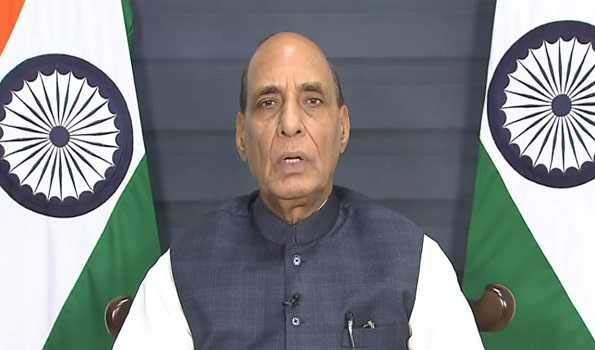 New Delhi, Oct 27 (UNI) India is fully determined to protect its maritime interests, while it supports mandates of UN Convention on Law of Seas, Defence Minister Rajnath Singh said on Wednesday as he called for cooperative response to the challenges in the seas.

He was speaking at the inaugural session of the Indo-Pacific Regional Dialogue, an international annual conference of the Indian Navy.

"India is committed to respecting the rights of all nations as laid down in the UN Convention on the Law of Seas (UNCLOS), 1982. We are fully determined to protect the legitimate rights and interests of our country in relation to our territorial waters and Exclusive Economic Zone, while supporting the maintenance of rule-based maritime systems, as mandated under UNCLOS, 1982," Rajnath Singh said.

Referring to Prime Minister Narendra Modi’s description of the Indo-Pacific as a natural region, where destinies of entities are interlinked, Singh said, the seas are a vital communication link to facilitate transport of goods, exchange of ideas, catalysing innovations and contributing to bringing the world closer.

“Although the Indo-Pacific is characterised by diversity, marked by a multiplicity of cultures, ethnicities, economic models, governance systems and varied aspirations, the oceans remain a common binding link,” he said.

The Defence Minister also pointed out that while the seas offer abundant opportunities for sustenance and growth of the mankind, they pose challenges such as terrorism, piracy, drug trafficking and climate change. He called for a cooperative response to these challenges which, he said, has considerable trans-national implications.

“There is a need to find convergence of interests and commonality of purpose on maritime issues,” he added.

"What we are seeing today is some states applying land centric territorial mindset to the basic idea of global commons attempting to seek greater domination and control. They create challenge to international rules, regulations and reinterpretation of such conventions which is turning the global commons, there is a danger of global commons turning into contested seas," the Navy Chief said.

India has been raising concerns over increased presence of Chinese Navy in the Indo-Pacific, particularly the Indian Ocean.

First conducted in 2018, the Indo-Pacific Regional Dialogue (IPRD) is the apex international annual conference of the Indian Navy, and is the principal manifestation of the navy’s engagement at the strategic-level.