India is the new hope for the world: PM 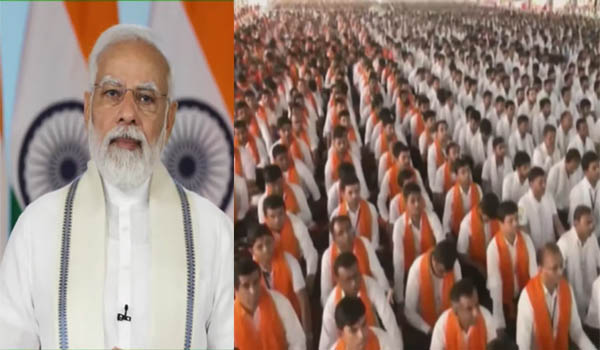 New Delhi, May 19 (UNI) Prime Minister Narendra Modi on Thursday said that India is the new hope for the world today and its successes in various fields are aimed at global good. The Prime Minister was virtually addressing Yuva Shivir at Karelibaug in Vadodara which aimed to involve more youth in social service and towards nation building. "From delivering vaccines and medicines to the world in the midst of the Corona crisis, to the hope of a self-reliant India amidst scattered supply chains, to the role of a capable nation for peace in the midst of global unrest and conflicts, India is the new hope of the world today," the PM said. He said that the countrymen are making efforts to build a new India with a collective resolve. We are reaching the pinnacle of success in multiple fields but our success is aimed towards the global good, he added. "A new India whose identity is new, forward-looking and traditions are ancient ! Such a new India, which moves ahead by taking both new thinking and age old culture together, should give direction to the entire mankind," he added. The PM said that India is achieving goals that were once thought to be impossible. With the strength of our youth, we are the third largest startup ecosystem in the world, he said. "From Yoga being recognised globally to Ayurveda saving lives, our traditional knowledge keeps serving humanity. Global threats like climate change are being solved with our ancient knowledge," he said. Lauding the successes of the country in various fields, the PM said that India is showing the path of Yoga to the entire humanity and introducing all to the power of Ayurveda. We are emerging as a nation looking forward to a new future, from software to space, he said. "Till 15 August 2023, can we stop transactions with cash and adopt digital payments ? Your small contribution can create a huge difference in small businesses and vendors lives," he said. He said that the government is working towards creating a new India with Sabka Prayas. A New India whose identity is new, special, forward looking and instilled with traditional culture, he said. The Prime Minister also spoke in Gujarati and lauded the advancements made by Vadodara. "Vadodara is becoming a centre for Gujarat's tourism ecosystem. Metro coaches manufactured in Vadodara are used globally. This is the strength of Vadodara," he said. The Yuva Shivir is organised by Shree Swaminarayan Temple, Kundaldham and Shree Swaminarayan Temple Karelibaug in Vadodara. According to the PMO, the Yuva Shivir aims to make the youth partners in building a new India through initiatives like Ek Bharat Shreshtha Bharat, Aatmanirbhar Bharat, Swachh Bharat etc.