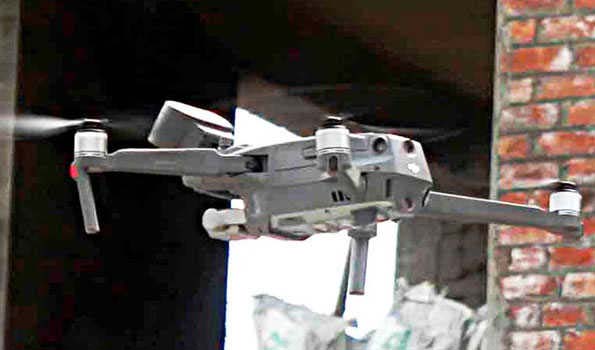 Jammu, Aug 2 (UNI) In the wake of rising drone threats and no let down in activity of flying objects, India plans installation of an ‘anti-drone’ system along the International Border and the Line of Control in Jammu and Kashmir.

As per intelligence inputs, the terrorist outfits have established a full fledged control room across the international border in Shakargarh area.

Shakkargarh in Pakistan falls across the international border opposite Kathua, Samba and Jammu districts of the Union Territory.

“The Pakistan based banned terror outfits Lashkar-e-Taiba and Jaish-e-Mohammad in connivance with Pakistan’s ISI have set up a Drone control room in Shakargarh area across the international border to carry out terror activities,” intelligence sources said.

Pertinent to mention that drone sightings over Jammu and nearby areas have become almost a regular feature since June 27 drone attacks at the Jammu Indian Air Force Station Jammu.

They said that the Brigade named as ‘Shakargarh’, has engaged the trained engineers assisted by technicians, assemble drones.

“The drones are being flown from the Shakkargarh Brigade based control room to Jammu Division,” sources added.

To counter the drone strategy allegedly being “executed” from the Pakistan side, India set to install ‘anti-drone’ gadgets along the International Border and the Line of Control.

“The anti-drone system will soon be installed all along the International Border to deal with the ever-increasing threat of drone attacks,” sources told UNI.

They said that according to reports, the hi-tech system is being introduced by one of the top organisations that deal in augmenting India’s defence mechanism.

“The BSF will take a final call on setting up the system on the basis of trials to be conducted soon,” sources expressed.

A senior BSF official, wishing not to be quoted, has confirmed to UNI on setting up ‘anti-drone’ gadgets along the border.

“The ‘anti-drone’ mechanism system will be tested before its installation at some identified locations along the border for which the border guards have already addressed to the concerned organization,” they revealed.

The Army has already installed the electro-optic drone systems at a few places along the LoC in Poonch and this system is capable of detecting enemy drones at a range of one and a half kilometers, intercepting its communication system, and shooting it in the air with laser technology.

The new technology loaded ‘anti-drone’ system will undergo real-time on-ground testing as per the geographical conditions of Jammu and Kashmir and as per the requirement of BSF and other security agencies.

“If fit for installation, then only the technology will be fixed; otherwise only after rectification of any technical snag if found,” sources asserted.

“The new system will be capable of real time scan, detection, chase and shoot down the unwanted and suspicious UAVs under any weather conditions and will also be issuing signals to completely block its radio system and GPS, forcing it to land,” they revealed.

The Jammu and Kashmir administration has already banned possession of drones by civilians, its use in marriage functions and to shoot other promotional events without any permission.

In the recent past, arms and ammunition, air dropped by drones was seized in parts of Jammu region.

In one of such examples, Jammu and Kashmir Police had shot a drone carrying a 5 kg IED in Gurah Pattan area near Akhnoor, Jammu.

It was the second drone shot down by security agencies in the Jammu division as it had brought down one in Kathua district in September last.

Last month, the army had fired on a flying object seen hovering over the Kaluchak, Ratnuchak military stations.

Drones were also spotted trying to enter the Indian side from across the international border in the Arnia sector on many occasions.

“The drone can cover a distance upto 20 kms from the border and its range decreases with the increase in the weight of its payloads,” said an expert.

During the last one and a half years, police have seized a large number of arms, ammunition and explosives that have been air dropped through drone sorties.

On July 24, the Border Security Force had lodged a “very strong protest’’ with Pakistani Rangers over drone activity in the Jammu division during a Sector Commander level meeting held along the International Border in Suchetgarh sector of Jammu.