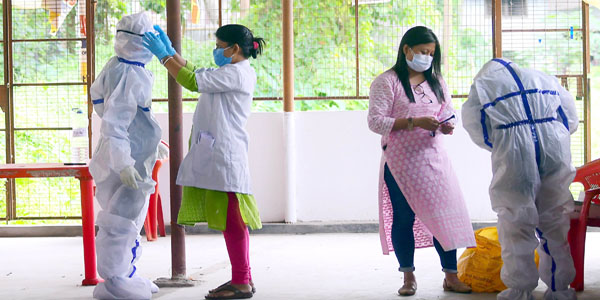 According to the Indian Council of Medical Research (ICMR), a total of 10,12,367 samples were tested on Tuesday.

"Wearing of masks will be mandatory. Only asymptomatic people will be allowed," he said.

The Union Health Ministry said that 54 pc of the COVID-19 cases reported in India are in the age group of 18-44 years, while 51 pc deaths are among people aged 60 and above.

The Health Ministry issued SOP for conducting exams with only asymptomatic staff and students be allowed inside the examination hall and only those examination centres which are outside the containment zone will be allowed to function.

Goa Chief Minister Pramod Sawant on Wednesday said he has tested positive for coronavirus. Sawant, 47, said he is asymptomatic and under home isolation.

Uttarakhand Chief Minister Trivendra Singh Rawat has gone into self-quarantine once again with his OSD testing positive for COVID-19.

A 42-year-old reporter of a Marathi news channel died of COVID-19 infection in Pune. Deputy Chief Minister Ajit Pawar had given instructions to probe the issue of non-availability of a cardiac ambulance.

Tamil Nadu government allowed government and private buses to ply within the State from September 7, as part of its unlock guidelines. Metro services in Chennai will also restart its operations from the same day.

Globally, the United States remains the worst-infected, with more than 62 lakh cases, followed by Brazil, recording over 39 lakh infections. The US also registered the highest 1.89 lakh fatalities, while 1.22 lakh deaths were recorded in Brazil.

India, at the third spot in terms of infections and fourth in fatalities, registered the first case and death on January 31 and March 13, respectively.