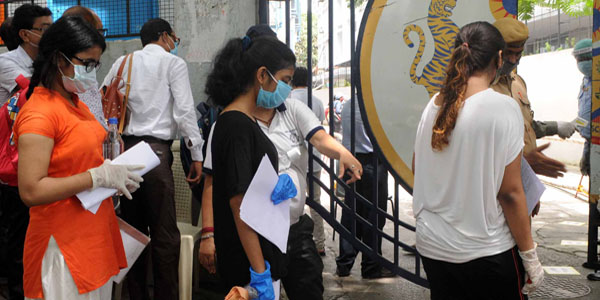 New Delhi, (UNI) The country continued to record high number of COVID-19 cases, with 94,372 counted and some 1,114 patients dying in the past 24 hours, according to the official data released on Sunday.

Sunday was also the fourth straight day, when more than 90,000 cases were registered. Except India, no country has come even close to this spike.

With the new additions, the case tally of the second-most infected country has surged to 47,54,356, while the death toll reached 78,586.

As per an update from the Union Health Ministry, the active cases now stand at 9,73,175, which is 20.47 per cent of the total cases registered. The recovery rate clocked is 77.88 per cent, while the death rate stands at 1.65 per cent.

Braving the rising number of cases, lakhs of aspirants across the country appeared for the National Eligibility-cum Entrance Test (NEET), an entrance test of undergraduate courses in medical colleges.

The test, conducted almost five months after the scheduled date in May, commenced keeping Standard Operating Procedure in place. The aspirants wore face masks and hand gloves and went through thermal screening.

According to reports, many candidates felt uncomfortable with covered faces and rubber gloves but had no option. Others took it as a new normal.

The NEET was earlier postponed twice. Its conduction was argued in courtrooms by the Opposition-ruled states and several other organisation. The dust was finally settled, when the Supreme Court gave a 'green signal'.

Along with masses, the COVID-19 continues to infect politicians, despite all precautions. Union Home Minister Amit Shah was re-admitted to the All India of Medical Science (AIIMS) for a complete checkup, just a day before the beginning of truncate monsoon session of Parliament. He has earlier tested positive for COVID-19 and fully recovered.

Delhi government directed as many as 33 private hospitals to reserve at least 33 per cent beds in Intensive Care Unit (ICU) for COVID-19 patients. The cases have again started rising sharply in the National Capital, with over 4,300 recorded on Saturday.

Maharashtra, Tamil Nadu, Andhra Pradesh, Karnataka and Uttar Pradesh account for 60 per cent of the total active cases. Also, 57 per cent of new cases were recorded from these five states only.

The Union Ministry has suggested practice of Yoga, Pranayams and intake of Chyawanprash for recovered patients, as well as healthy people, to build a strong immunity system.

Globally, United States is topping the tally with more than 66 lakh cases and 1.98 lakh deaths. Brazil, at third spot, has recorded over 43 lakh cases and some 1.31 lakh fatalities.

Oxford University has resumed the clinical trials of its ChAdOxl COVID vaccine, which were paused, after a volunteer fell ill.