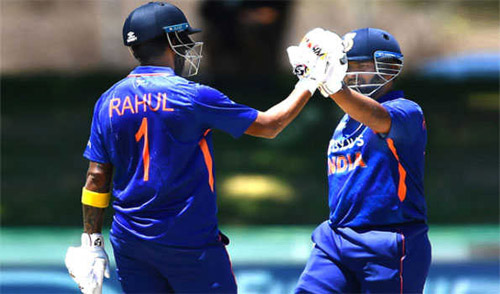 India got off to a flying start, with a 63-run opening partnership between Shikhar Dhawan and KL Rahul. Sisanda Magala, who replaced Marco Jansen in the playing XI, conceded 15 runs in his first over.

Dhawan kept the runs coming with his solid cover drive. The duo looked in great touch. Lungi Ngidi created a chance but Rahul, who was on 8, got a life as Janneman Malan put him down at gully.

Aiden Markram finally got the breakthrough as Dhawan holed out to the deep fielder for 29. Keshav Maharaj claimed the big wicket of Virat Kohli for a duck. The former captain gave a straight catch after playing a bizarre one-handed cover drive.

South Africa could have had Rahul's wicket after a horrible mix up by him and Pant at the same end but South Africa made a mess of it. Pant played the ball to midwicket, took a few steps down before changing his mind.

Temba Bavuma picked up the ball and threw it to the bowler's end as Rahul had reached striker's end. However, Maharaja couldn't collect the ball, which went towards the deep cover. Rahul, who was still at the keeper's end, immediately realised the ball was still far so he managed to return to the non-striker's end.

Pant started to attack, whacking one from Maharaj over mid-wicket for a maximum. Two balls later, Rahul found a boundary through fine leg. The Rahul-Pant stand gained momentum after the loss of two wickets in quick succession. India crossed the 100-run mark in 20 overs.

The wicketkeeper-batter Pant brought up his fourth ODI fifty off 43 deliveries. The knock saw four boundaries and one maximum. Soon, Rahul reached his 10th ODI half-century and first as captain.

Magala got the much-needed breakthrough as he dismissed Rahul for 55 and broke the 115-run partnership for the third wicket. The India skipper chipped the ball to Rassie van der Dussen at midwicket.

South Africa removed the dangerous Pant (85 off 71 balls) as he hit straight to long on off Tabraiz Shamsi, reducing India to 183/4 after 32.3 overs. The onus to take India to a defendable total shifted to the shoulders of new batters - Shreyas Iyer and Venkatesh Iyer - in the middle.

Neither of them could stay at the crease for long as Shamsi dismissed Shreyas (11) leg-before but not before a review. The South Africa wicket-keeper Quinton de Kock's superb timing and quick hands stumped Venkatesh (22) off Andile Phehlukwayo.

The India all-rounder Shardul (40 not out) along with Ravichandran Ashwin (25 not out) kept fighting towards the end, taking India past the 250-run mark. For South Africa, Shamsi took two wickets, while Magala, Markram, Maharaj and Phehlukwayo got a piece each.