India will learn from mistakes: Pant 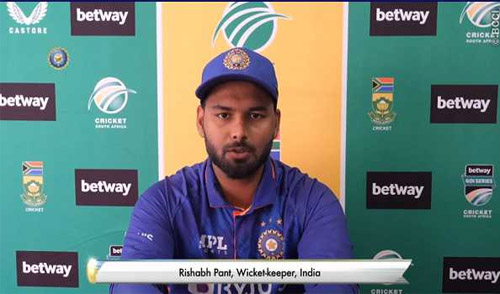 India not only went down against South Africa by seven wickets, but lost the three-match series 0-2 with one game to go.

"As team we are always looking to improve. We are looking to learn from our mistakes. Hopefully, we can improve in the next match," said Pant at the virtual press conference on Friday.

The wicketkeeper-batter Pant and India captain KL Rahul stitched a solid 115-run partnership for the third wicket. After their dismissal, it was Shardul Thakur whose unbeaten 40 helped India reach 287/6.

However, the Indian attack couldn't get the breakthrough as South Africa's Janneman Malan and Quinton de Kock formed a 132-run opening stand. In spite of losing the attacking de Kock, South Africa's middle-order stepped up and took the hosts comfortably home.

When asked about India's shortcomings, Pant stressed, "We didn't get enough wickets in the middle overs. I think they batted well in middle overs."

"Wicket was on slower side. We had enough runs on board. I think when we batted, the wicket was much better. We could have had batted well in the middle overs. Their spinners were consistent," he added.

Talking about his conversation with Rahul in the middle, Pant said the plan was to bat deep and build partnership.

"Conversation with Rahul was to take the game deep and build partnership. I think if we could have had batted long, we could have added 15 more runs," he signed off.

India will meet South Africa in the third and final match on January 23 in Cape Town.