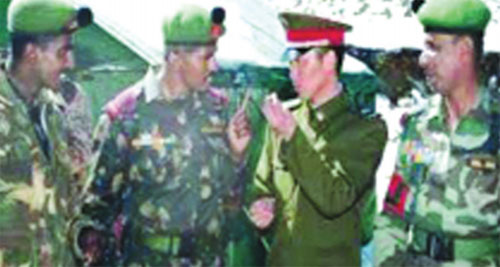 A severe clash has taken place at Sino-Indian border in the early hours Sunday. Many Chinese and Indian soldiers have suffered fatal injuries, sources said. Sources on condition of anonymity it has been said, “The aggressive confrontation between the troops from the two sides took place near Naku la sector, further than Munguthang at altitude of over 5000 meters in North Sikkim.

Four Indian soldiers and seven Chinese soldiers have suffered injuries. On the whole, the operation involved 150 soldiers.” The clash started at 1.32 am on Sunday. Injured have been hospitalized. It is to be noted that the soldiers of Indian Army and People’s Liberation Army happened to be maintaining cordial relations in the past, celebrating Indian and Chinese National Days, Republic Day and special festivals and even exchnged sweets. In total, 150 soldiers were present when the confrontation took place, which was later resolved at the local level.

The sources said that temporary and short duration face offs occur as boundaries are not resolved. “Incidents of face off article took place. Aggressive behaviour and minor injuries took place from both sides. They were disengaged after dialogue and interaction at local level,” they added. Troops resolve such issues mutually as per established protocols. Naku La sector is located ahead of Muguthang and the Naku La area was traditionally not prone to clashes between the soldiers from the two countries.