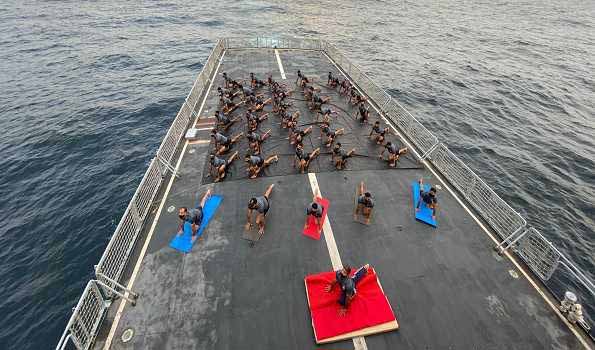 New Delhi,  (UNI) The Indian Navy on Monday said that the International Day of Yoga was celebrated at Western Naval Command (WNC), with all serving naval personnel including Defence Security Corps (DSC), the Military Engineer Services (MES), Defence Civilian Employees and their family members enthusiastically participating in the 7th International Day of Yoga on the theme 'Be with Yoga - Be At Home'.

An online yoga session was conducted under the aegis of Navy Wives Welfare Association (Western Region) for the naval community in South Mumbai with the aim to encourage all personnel and their family members to practice yoga on a regular basis for bolstering health and boosting immunity, especially in these trying times. Various asanas were demonstrated through digital platforms and replicated by the enthusiastic participants.

Additionally, all sea going units in the WNC also took part in celebrating the day by conducting Yoga sessions at the unit level, both at sea and in harbour, with due observance of all covid protocols. Yoga has been formally assimilated into the Navy's physical fitness regime and had been found to be very beneficial to men at sea given the paucity of space on-board ship , the officials in Indian Navy informed.

Similarly, the Southern Naval Command also celebrated the International Yoga Day by participating all defence and civilian personnel on the same theme of 'Be with Yoga- Be At Home'. The Flag Officer Commanding in -Chief of SNC Vice Admiral AK Chawla and his wife joined the families of Southern Naval Command in a virtual Yoga session.

Various ships under Southern Naval Command on mission deployed in high sea across Indian Ocean region and beyond, in the true spirit of "International Yoga Day"participated in the Yoga session and Vice Admiral Chawla encouraged SNC Pariwar to practice Yoga regularly and make it a way of life.