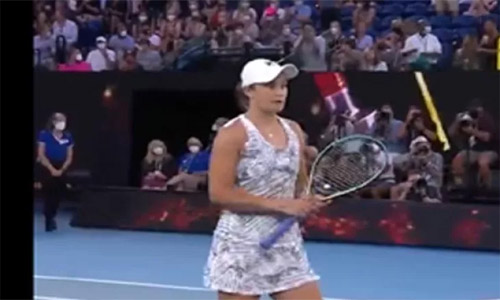 Melbourne, Jan 25 (UNI) World No.1 Ashleigh Barty of Australia on Tuesday progressed into the Australian Open women singles semifinal after beating Jessica Pegula of the US. Barty required just 63 minutes to secure a 6-2, 6-0 victory over the 21st seed American and became the first Australian women's singles player to hoist a major on home soil since Wendy Turnbull in 1980. "That was solid tonight. I was able to serve and find a lot of forehands in the centre of the court and I was happy to take the game on; be aggressive off my forehand, not worry if I miss a couple as long as I'm doing the right thing, and I felt like I was able to do that the whole match," said Barty. "I'm absolutely loving playing out here. Hopefully there is a little bit more left. I've obviously got a couple more years of experience under my belt in handling different situations and being able to problem solve out on court," she added. The Australian will be up against Madison Keys of the US in the semifinals. Speaking about Keys, Barty said: "I have had plenty of battles with Maddy before… I can't wait, I know it'll be a good one and whoever can execute better will be in the final."

World No.1 Ashleigh Barty of Australia