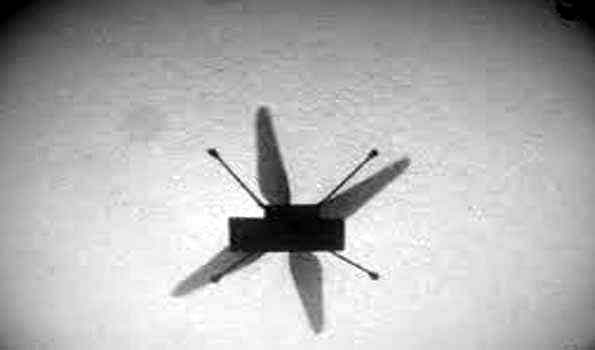 Washington, Jun 9 (UNI) NASA's Ingenuity helicopter has successfully completed its seventh flight on Mars, the space agency's Jet Propulsion Laboratory (JPL) announced.
During the previous flight on May 27, the helicopter relocated to a new area of the Red Planet for the first time. It climbed to a record altitude of 10 meters (33 feet), took images of the area in color and then landed.
"Another successful flight ... #MarsHelicopter completed its 7th flight and second within its operations demo phase. It flew for 62.8 seconds and traveled Rs106 meters south to a new landing spot. Ingenuity also took this black-and-white navigation photo during flight," the JPL tweeted late on Tuesday.
Attached to the belly of NASA’s Perseverance rover, Ingenuity arrived at Mars’ Jezero Crater on February 18.