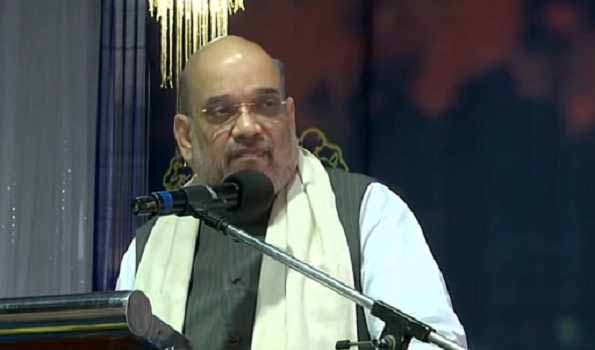 Shillong, Jul 24 (UNI) The Central Government was making efforts to inter-connect all State capitals in the North East and thereby enhance connectivity of the “remote region” with the rest of the country by 2024, Union Home Minister Amit Shah said here in Meghalaya on Saturday.
“North East is one region in the country, where connectivity is of much importance, without which it difficult to bring development in the region,” Shah noted after inaugurating the inter-state bus terminus
at Mawiong, near Shillong, which he said would become an economic centre for the entire region.Stating that Shillong had been the capital of erstwhile united Assam, the Union home minister said  the city had always been a place of importance and it was natural for it to be connected with otherNorth Eastern States, even as he noted that when India would be celebrating its 75th year of Independence next year, Meghalaya would be observing its 50th year of statehood.
The Home Minister mentioned that without adequate connectivity neither can the security of the North East be strengthened nor can the erstwhile glory” of the region be restored or the economy  be enhanced.
Noting that connectivity in the North East had been accorded prime importance by Prime Minister Narendra Modi ever since the BJP came to power in 2014, Shah said, “It will be our endeavor to connect all the State capitals in the region through railways and airways and alongside road connectivity will also be strengthened and transportation facilitated”.
Delivering his speech, Meghalaya Chief Minister Conrad K Sangma said that the inter-state bus terminus, which has been 90 per cent funded by the North Eastern Council (NEC) and 10 percent by the State, would be “productive” for both Meghalaya and the North East as a whole.
“In the future we need to accord importance to air and international connectivity as well,” he underscored.  Observing that during the pre-Independence time, the North East had 20 percent share in the country’s GDP, but now has only 3 percent, Sangma said this could be “restored to the same level” by enhancing economic activities.
"I am sure with the completion of this project, it will be a great boon for the entire region, specially for the connectivity of buses, for the people as well as goods from different parts of the North East to our state,” the Chief Minister expressed optimi