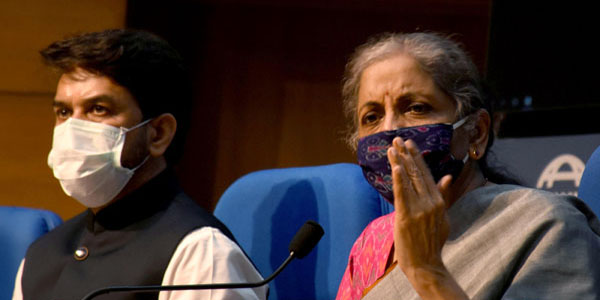 All central government employees can now get interest-free advance of Rs 10,000, in the form of a prepaid RuPay Card, to be spent by March 31, 2021.

The one-time disbursement of Special Festival Advance Scheme is expected to amount to Rs 4,000 crore; if given by all state governments, another Rs 8,000 crore is expected to be disbursed. Employees can spend this on any festival. Announcing Capital Expenditure Boost for States, the minister said a special interest-free 50-year loan to states is being issued, for Rs 12,000 crore capital expenditure — Rs 200 crore each for 8 North East states, Rs 450 crore each Uttarakhand, Himachal and Rs 7,500 crore for remaining states, as per share of Finance Commission’s devolution.

All the above interest-free loans given to states are to be spent by March 31, 2021, she said. The 50 per cent amount will be given initially and the remaining upon utilization of first 50 per cent. Under Part three of Rs 12,000 crore interest-free loans to states, Rs 2,000 crore will be given to those states which fulfill at least 3 out of 4 reforms spelled out in Aatma Nirbhar Bharat package.

Ms Sitharaman stressed that this is over and above other borrowing ceilings. ‘’Capital expenditure - money spent on infrastructure and asset creation - has a multiplier effect on the economy, it not only improves current GDP but also future GDP, we want to give a new thrust to capital expenditure of both states and Centre,’’ she said. In Capital Expenditure Boost for the Centre, an additional budget of Rs 25,000 crore (in addition to Rs 4.13 lakh crore given in Budget 2020- ‘21) is being provided for capital expenditure on roads, defence, water supply, urban development and domestically produced capital equipment.

The proposals to stimulate demand are designed to stimulate demand in a fiscally prudent way - some of them involve advancing of expenditure, with offsetting changes later - others are directly linked to increasing GDP, Ms Sitharaman said. The Minister said, ‘’We estimate that the measures announced today, for boosting consumer spending and capital expenditure, will boost demand by Rs 73,000 crore, to be spent by March 31, 2021. Given that private sector spending through LTC tax benefit would be at least Rs 28,000 crore, we estimate total demand boost due to today’s measures to be more than Rs 1 lakh crore.’’

If demand goes up based on the stimulus measures announced today, it will have an impact on those people who have been affected by Covid-19 and are desperately looking for demand to keep their business going, she said. Emphasising on giving impetus to the economy badly affected due to Corona pandemic and to increase consumer demand in the festive season, the Centre on Monday announced Leave Travel Concession (LTC) Cash Voucher Scheme, Special festival Advance Scheme for Central employees and additional Rs 37,000 crore capital expenditure and said that these measures will help in increasing the demand of about Rs one lakh crore.

Addressing a press conference here, Union Finance Minister Nirmala Sitharaman along with her deputy Anurag Thakur, announced stimulus to boost demand in the Economy and highlighted that the total demand boost due to today’s measures is expected to be more than Rs 1 lakh crore. She said, ‘Today’s solution should not cause tomorrow’s problem and maintained that the government has kept in mind that measures to stimulate demand must not burden the citizen with future inflation or put government debt on an unsustainable path.

? Interest-free festival advance of Rs. 10,000 for all central govt employees

? Centre to give cash vouchers to staff in lieu of LTC this year

? Given that private sector spending through LTC tax benefit would be at least Rs 28,000 crore