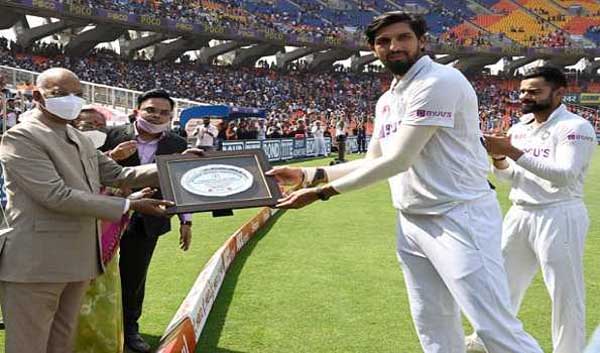 Ahmedabad, Feb 24 (UNI) Ishant Sharma became the second India fast bowler to play 100 Test matches when he took the field against England in the third Test at the Narendra Modi Stadium here on Wednesday.
The right-arm seamer not only became the second India pacer after legendary Kapil Dev to reach achieve the feat, but he is now only the fourth Indian bowler to achieve the glorious milestone.
Overall, Ishant is the 11th player to represent India in 100 Tests. The bowlers in the list include Anil Kumble (132), Kapil Dev (131), Harbhajan Singh (103).
For over a decade, Sharma has been the spearhead of India’s fast-bowling attack. He also achieved another milestone during the ongoing England series, passing 300 Test wickets.
The 32-year-old becomes the 70th cricketer to appear in 100 Tests and he was presented with a special cap and a memento by the President Ram Nath Kovind, before the start of the match.
India's captain Virat Kohli sung the praises of his friend ahead of the third Test in Ahmedabad, revealing he was in fact the person to inform a sleepy Sharma about his first India call-up.
"I have known Ishant for many years now. He started playing state cricket with me from his first season onwards. We have been roommates for many years in state cricket, in Ranji Trophy cricket. When he first got selected for India, he was fast asleep in the afternoon, and I had to kick him off the bed and say you have been selected. And he wouldn't believe me. That's how far we go back,' said Kohli.
"I couldn't be happier for him. Playing 100 Test matches as a fast bowler is no mean feat. Especially in our conditions where things get so difficult. But he persevered, he kept working hard. That's been his essence from day one," he added.