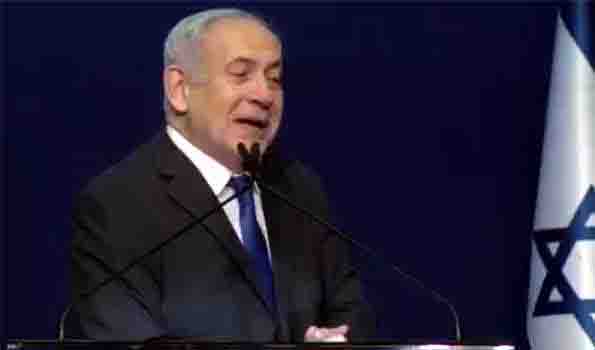 Tel Aviv,Prime Minister Benjamin Netanyahu on Tuesday claimed victory in Israel's third general election in a year, after exit polls put him slightly ahead of his main rival Benny Gantz.Three projections gave Mr Netanyahu's right-wing Likud party somewhere between 36 to 37 seats, and Mr Gantz's centrist Blue and White alliance between 32 and 34 seats.The polls suggest that Likud and its right-wing allies might wing somethng like 58-59 seats, thereby, just falling short of a majority in parliament.Monday's election was Israel's third in less than a year. In both the previous elections, no single party or political grouping could command a clear majority in parliament, even though then as well Mr Netanyahu's party Likud party emerged as the single largest party. Mr Netanyahu, 70, is Israel's longest-serving leader. He is seeking a record fifth term, having been in office from 1996 to 1999 and again from 2009.This election has taken place just two weeks before Mr Netanyahu is due in court to face corruption charges, which he has consistently denied.The Joint List alliance of Arab parties was projected to get 14 or 15 seats; the ultra-Orthodox parties Shas and United Torah Judaism 16 or 17 seats; the nationalist Yisrael Beitenu party six or seven; the right-wing Yamina alliance six or seven; and the centre-left Labour-Gesher-Meretz list six or seven. This means that for Mr Gantz once again the polls would men bitter disappointment once again but he did not immediately admit defeat, and said that the exit polls can and have been proved wrong in the past as well.Yisrael Beiteinu leader Avigdor Lieberman, who was in the position of kingmaker in the last two elections, said it would keep its campaign promise not to join a coalition with religious parties.