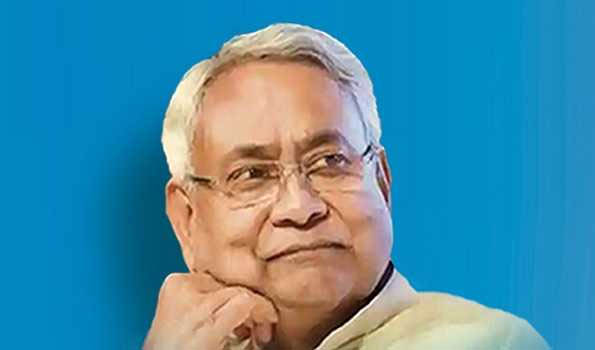 Patna, Jun 5 (UNI) Diatribe between BJP and JD(U) leaders continues even after BJP leader suspended its MLC Tunnaji Pandey following his remark against Chief Minister Nitish Kumar,
as it was turn of former MLA and senior JD(U) leader Maheshwar Prasad Yadav who virtually questioned the performance of Prime Minister Narendra Modi, saying it was chaos all around and Mr Kumar should gear up to become PM candidate in 2024 Lok Sabha elections.
Mr Yadav told media persons that there was chaos all around in the country and it was time for Mr Kumar to gear up for PM candidate in 2024 Lok Sabha elections.
He had also written a letter to Mr Kumar with such request, he stated.
JD(U) leader said that on the occasion of 'Sampoorna Kranti Diwas' today, it was proper and appropriate for him to make such a request to Mr Kumar.
Veteran socialist leader Jaiprakash Narain had called for total revolution on June 5, 1974 but it materialised to a great extent only under the leadership of Mr Kumar in Bihar, he pointed out.
" It is chaos all around in the country and Prime Minister Mr Modi is facing strong opposition from several corners", Mr Yadav said adding that only Mr Kumar could bring qualitative changes in all spheres in the country and he should march ahead to become PM candidate in next Lok Sabha elections.
JD(U) had no alliance with BJP outside Bihar and there was no difficulty for his party to contest Lok Sabha elections in other states of the country, he clarified while responding to  queries of media persons.
" There is no grievances from BJP in Bihar and NDA government led by Mr Kumar is working smoothly", JD(U) leader said while replying to another query of media persons.
He, however, evaded to give a direct reply when asked whether Prime Minister Mr Modi had failed to fulfill aspirations of the people, and only said he was facing protest and opposition from several corners in prevailing scenario.
As it is, BJP MLC Tunnaji Pandey had earlier said the mandate was for RJD leader Tejaswi Prasad Yadav in 2020 Bihar Assembly elections but Mr Kumar misused his official position as CM to influence the mandate in his favour.
Mr Kumar was CM of prevailing circumstances in 2020, he had also remarked.
Taking serious note of remark of Mr Pandey, BJP had suspended him from the party.