JP Nadda slams Mamata Banerjee for her comment on CRPF, says BJP would secure over 200 seats 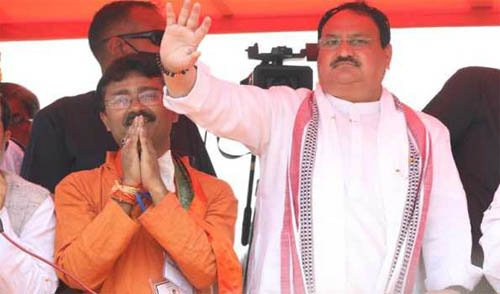 Dinhatta, Apr 8 (UNI) Bharatiya Janata Party president Jagat Prasad Nadda on Thursday reiterated that people of West Bengal have decided to defeat the ruling Trinamool Congress headed by chief minister Mamata Banerjee and usher a new BJP government with a win over 200 votes in the 294-member state assembly.
Mr Nadda's version came a day after union home minister Amit Shah said the BJP was ahead in about 67 seats out of 91 seats for which polling held in the first three phases of March 27, April 1 and April 6.
Mr Shah had said in the first two phases ( 60 seats ) BJP would win in at least 50 seats and in the 3rd phase for 31 seats, the saffron brigade was ahead in 14 to 17 seats.
Mr Nadda, who is on a roadshow for BJP candidates, including Nishit Pramanik, said today, "People want to say goodbye to Mamata Banerjee because of ' dictatorial and extortionist" regime in the state.

He said the people have become frustrated with the false promises of the TMC government, which has lost the people confidence and virtually running the show with police raj.
He said scores of BJP workers have been beaten by the TMC men even the election code of conduct in force but the local administration was still remaining mute spectator.
Mr Nadda also charged TMC supremo Mamata Banerjee with setting people against the central forces and said this was an example of how the chief minister became fearful of losing her seat of power.
Mr Nadda said Mamata Banerjee's statement in a rally against the central forces, including CRPF, showed that 'she has accepted defeat'.
"Mamata Banerjee has acknowledged her defeat. Such statements coming from a person who holds a responsible office such as the Chief Minister's Office shows that she has accepted the defeat," BJP president Mr Nadda, who is on three roadshows in north Bengal, said.
On Wednesday, Ms Banerjee had alleged that the CRPF was 'harassing' people in the state and told them that they should gherao the forces and go for voting.
"The Election Commission is running the administration. Please see that nobody is killed during the polling process. I request you to monitor CRPF personnel who are on duty now in the state. They should not be allowed to harass women. There are cases of girls being molested by the central force employees," Ms Banerjee had said while urging voters to 'gherao' the officials of the central force.
The state goes to the fourth phase poll on Saturday for 4 seats in five districts of Howrah, Hooghly, South 24 Parganas, Alipurduar and Cooch Behar.