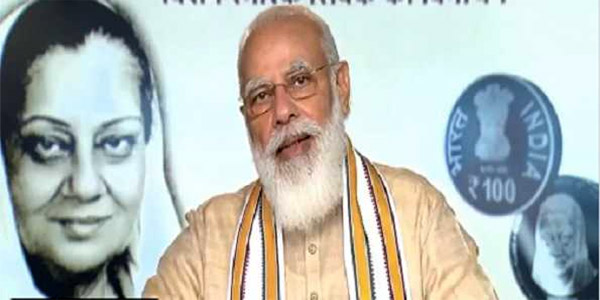 Prime Minister Narendra Modi on Monday said that Rajmata Vijaya Raje Scindia dedicated her life to the poor and proved that for people's representatives, not 'Raj Satta' but 'Jan Seva' was important.

'The Rajmata proved that public service, not royalty, is most important for public representatives,' said Mr Modi paying tributes to the great personality.

The Prime Minister released commemorative coin of Rs 100 in honour of the Rajmata via video conferencing as part of her birth centenary celebrations.

Mr Modi said Rajmata was the queen of a royal family, but she struggled to protect democracy, spending significant periods of her life in prison.

'We are witnesses to what she endured during the Emergency. There have been many occasions when posts were offered to her but she turned down with humility,' he said in his address.

'We are witness to what she endured during the Emergency. Rajmata lived life by connecting with the common people, the poor, and dedicated her life to them.

Mr Modi said it is also a wonderful coincidence that the struggle she had fought for the construction of the Ramjanmabhoomi temple, her dream has also been fulfilled in the year of her birth centenary.

'A strong, secure, prosperous India was Rajmata's dream. We will fulfill these dreams with the success of a self-reliant India. Rajmata's inspiration is with us, her blessings are with us,' he said.

Mr Modi maintained that by making a law against Triple Talaq, the country has taken forward Rajmata Scindia's vision of women empowerment.