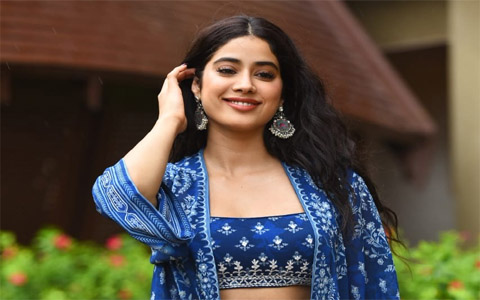 Janhvi Kapoor is a true fashionista and she has proved it time and again. From her airport looks to gym looks, red carpet looks and more, the Gunjan Saxena: The Kargil Girl actress never misses a chance to set the shutterbugs on a photo clicking spree every time she steps out in the city. And now, Janhvi is once again making the headlines as she is gearing up for the release of her upcoming movie GoodLuck Jerry and is busy promoting the film. Recently, the Dhadak actress was clicked in the city during the promotions and she did win hearts with her style statement.
In the pics, Janhvi was seen wearing a blue coloured co-ord outfit with a white print and it was paired with a strappy blouse, matching cape and sharara pants. She was also seen flaunting her toned midriff and had kept her tresses open. Janhvi completed the look with golden heels. Besides, Janhvi also had her make-up game on point as she headed for GoodLuck Jerry promotions.
Apart from GoodLuck Jerry which is slated to release on July 29, Janhvi is working on Nitesh Tiwari’s upcoming directorial Bawaal with Varun Dhawan. To note, it will mark Janhvi’s first collaboration with Varun and will be hitting the screens on April 7 next year.