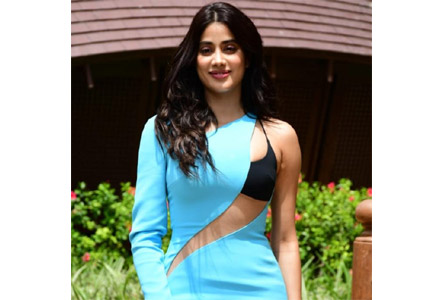 Janhvi Kapoor never misses a chance to make heads turn with her fashion game. The actress also never hesitates in going bold with her fashion choices. All eyes are on her as she dropped the first look poster of her upcoming movie GoodLuck Jerry. The excitement levels of the fans have raised to the next level and it was also announced that the movie will be streaming on OTT platform from July 29. Well, the Roohi actress has started the promotions for this film and was spotted looking like a diva in her blue dress.
Janhvi Kapoor looks breathtakingly gorgeous in her blue stylish dress. The dress had full sleeves from one side and was sleeveless from one side. The dress had a stylish cut till her waist and she wore a black bralette that was partly visible. The ankle-length dress also had a thigh-high slit and the actress completed her look with black strappy heels. She left her hair open and smiled and posed for the paps. We must admit that Janhvi looked like a diva and you would find it difficult to take your eyes off her.
Meanwhile, the first look of GoodLuck Jerry that just released this morning is receiving quite good responses from fans. This film is directed by Siddharth Sengupta and backed by producer Aanand L Rai. It is reportedly a remake of a South film. Janhvi will be seen in the lead and previously, it has been shot in parts of Punjab and Chandigarh.
Besides this, Janhvi will also be seen in Mili. The film is directed by Mathukutty Xavier, who had directed the original Malayalam film back in 2019. The film also stars Sunny Kaushal and Manoj Pahwa and is backed by Janhvi's father Boney Kapoor. It marks her first collaboration with her father. Apart from this, she also has Mr and Mrs Mahi with Rajkummar Rao.