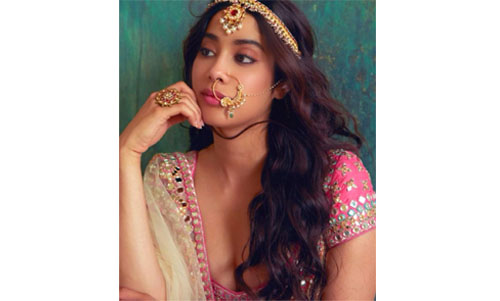 Janhvi Kapoor always nails contemporary looks with such ease that inspires her fans. The actress also keeps on sharing her enticing and bonny looks on social media which sets the internet on fire. Recently also, Janhvi shared some glimpses of her recent photoshoot for a leading magazine. But in the worst scenario of COVID-19, the actress keeps the emotions of people in mind and penned, ''This cover, however, and the subsequent posts of it had been committed to a while back and were shot before lockdown.''
Janhvi Kapoor shared a string of pictures on Instagram featuring herself in bridal attires. She wore the designer dresses by Abhinav Mishra and donned the exclusive pieces of jewelry by AKM Mehrasons Jewellers. Her photographs were clicked by Nishanth R and she was styled by Tanishq Malhotra and Vikas.
On the work front, Jhanvi Kapoor was last seen in the horror-comedy film, Roohi alongside Rajkummar Rao and Varun Sharma. For now, Jhanvi Kapoor is shooting for Siddharth Sen Gupta 'Good Luck Jerry' in which she is playing the role of a girl who gets involved in a drug racket to earn quick money. Apart from this, she will be seen in Dharma Productions' Dostana 2.