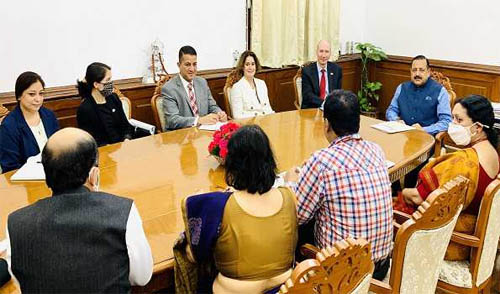 The Science and Technology Minister reiterated India's commitment to promote Atomic/Nuclear programme for providing not only a major source of clean energy but also as a major tool of application in areas like healthcare and agriculture sector.

At a meeting with a high level US Delegation, led by Deputy Secretary of Energy, David M Turk, who called on Singh here, the Minister said India and the United States are revamping their strategic partnership to focus on clean energy sectors, such as biofuels and hydrogen.

Singh informed the delegation that in the next ten years, India will produce more than three times nuclear power and it is expected to reach 22,480 MW by the year 2031, from the current 6780 MW as more nuclear power plants are also planned in future.

Referring to Prime Minister Narendra Modi's out of box idea for joint ventures in Nuclear Energy sector, the Minister pointed out that Gamma irradiation technology for food preservation has already been shared with private players and presently 26 Gamma Radiation Processing Plants are operational in the country in private, semi government and government sector for irradiation of various products.

The Minister also underlined the proposal for establishing a Research Reactor in PPP mode for production of medical isotopes to promote welfare of humanity through affordable treatment for cancer and other diseases.