Join Garud on his escapades through samudramanthan 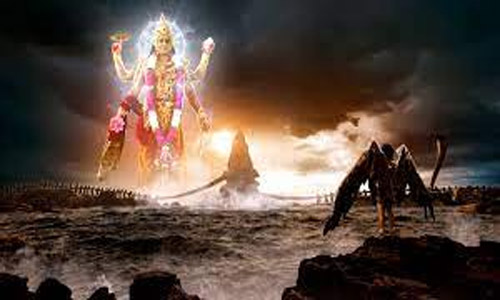 Derived from the mythological archives, Sony SAB’s DharmYoddhaGarud brings forth the classic tale of Samudra Manthan where in a collective effort, Gods take on Evil, in their endeavor to churn the ocean of milk to get extract the nectar of immortality or amrit which would make the victors reign supreme forever.
Initially, an insecure Lord Indra did not want to join hands with the Asuras. While the Devtas contemplated their options, Lord Vishnu (Vishal Karwal) advised them to form an alliance with the Asuras, promising them that if they played the cards right, they would eventually gain the amrit. Lord Vishnu was well aware of Garud’s(Faisal Khan) might and prowess, and he decided to help him realize his actual destiny by assigning him several tasks. As the extensive process began, both the Devtas and Asuras realized they would need a medium and a rope to churn the ocean. Thus began Garud’s adventures where he met Mount Mandara and requested his assistance, but despite his intent to serve as a churning rod, he informed Garud that he was unable to move and thus Garud flew Mount Mandara on his back and once again proved his excellence. The Serpent King Vasuki who abides on Lord Shiva’s neck was approached to be the churning rope.  Meanwhile, Vinta (Toral Rasputra) comes across a disabled, old beggar and she instinctively decides to help him.
Behold as the saamudramanthan will not only release a number of precious secrets hidden of the ocean but will also decide Garud’s destiny. Will Garud be able to free his mother from slavery? Who is the old beggar and how will Lord Vishnu come to the rescue of his devotees?
Faisal Khan who essays the role of Garud says, “Saamudra Manthan is one of the most significant events in Indian mythology and it was a task capturing the very essence of the event. It was also one of the most interesting sequences we have shot so far. This is only the beginning of his adventures as towards the end, Garud will face his true destiny and counter several dangerous assignments to prove his worth. We had a lot of fun filming the scenes and we have tried to keep it as authentic and visually appealing as it can get. I can assure our audience that it only gets more interesting from here on so please stay tuned and support us.”