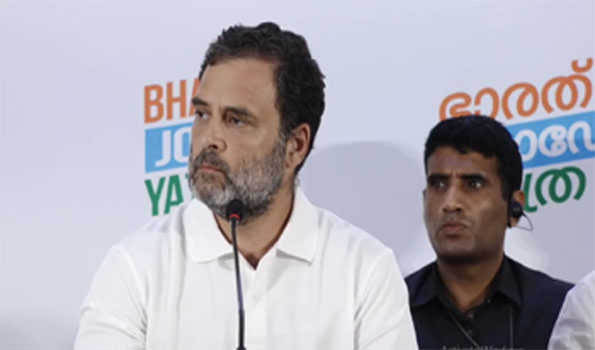 Ernakulam (Kerala), Sep 22 (UNI) It is important for the opposition to come together to fight the ideology of the BJP and RSS, Congress leader Rahul Gandhi said on Thursday on day 15 of the Bharat Jodo Yatra.

"It is very important that the opposition parties come together. I think that is required to fight the ideology and the financial power and institutional power ... of the BJP and RSS," he said.

"So it is important that the opposition has a discussion and comes out with a strategy," he said.

With a war of words on between leaders of Congress and the Communist Party of India-Marxist (CPI-M) over the long duration of the Congress Yatra in Left-ruled Kerala, the Congress leader avoided making any direct attacks at the Marxists but said he had an "ideological disagreement" with them.

In response to a question on his evaluation of the Left government in Kerala, Rahul Gandhi said: "This is better done by the leadership of the Congress in Kerala. I am very clear what my goal is with regards to this Yatra, it is to put across to people of India, hatred arrogance and violence visible now is not good for our country.

"As far as Left Front goes, I have an ideological disagreement with them. I have issues with how they view politics and Kerala," he said.

"People who are walking with us in Bharat Jodo Yatra are evaluating the Left front govt. They are telling you what they think of Left front government... My focus on this yatra is the hatred, the anger, the violence that BJP and RSS are spreading," he said.

"I don't want to get into a conversation that diverts me from that aim. My aim is clear -- we are not going to accept an India that is divided, hateful. Neither the Congress nor the opposition nor the people of India are going to accept it," he said.

Rahul Gandhi added that many Left front workers have also come to the Yatra and shook hands with him.

"They are there because they appreciate the idea of what we are doing... Of course it becomes very difficult in political combat for senior leaders of the Left to support what we are doing and we understand that. But inside their hearts, even they know the point I am raising, the idea that India is being divided, they know I am raising the correct point," he said.

The Bharat Jodo Yatra was launched at Kanyakumari on September 7. It will cover 3,500 km, crossing 12 states and two Union Territories, over a period of around five months.