Jungle Raj in UP : Priyanka 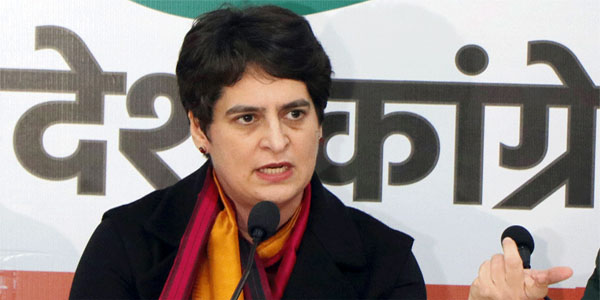 Congress General Secretary Priyanka Gandhi Vadra on Saturday expressed her displeasure over the deteriorating law and order situation in Uttar Pradesh, saying that crime and corona have gone out of control in the state.

"Jungle raj is spreading in Uttar Pradesh as crime and Corona both have gone out of control. Lawyer Dharmendra Choudhury, who was kidnapped 8 days back, body was recovered last night", Ms Vadra, said in a tweet.

"Kanpur, Gorakhpur and now Bulandshahr. In every case, laxity of the police was revealed giving signal of the jungle Raj. Do not know when the government will wake, " she added.

The deceased lawyer, Dharmendra Choudhury, went missing under Khurja police station area on July 25 and police recovered his body on Friday night. The body was recovered from a marble factory and his motorcycle was found 6 Km away.

Senior Superintendent of Police (SSP) Santosh Kumar Singh said here on Saturday that the victim, who was a lawyer and was also involved in real estate business was reported missing from 2300 hrs on July 25.

Though the family members did not express any suspicion on anyone nor any ransom call was received, the SSP said that they did focus on some close friends of the lawyer. "We set up several teams and even some teams visited other states where the victim could have gone .But when we concentrated on Vikki , where the victim went for dinner on July 25 , everything got cleared," he said.

Mr Singh said Vikki was all along with the police during the entire investigation but when we went through a diary of the victim , we had some suspicion on him as Vikki was to pay Rs 80 lakh to the victim.

But when we asked Vikki to go for a lie detector test he refused which made our suspicion on him more strong but still we did not have any evidence against him except the victim had his last dinner with him.

"We took a chance and reached his marble godown , where after intensive search found the rotten body of the lawyer. The victim was killed and then his body was half burnt, " the SSP disclosed.

Later Vikki along with his two servants was arrested in the murder .