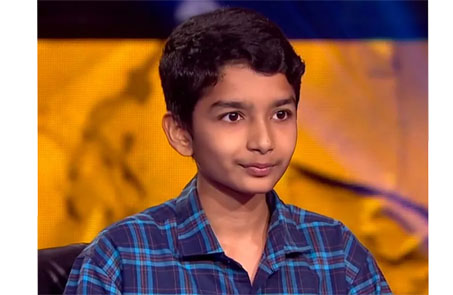 Amitabh Bachchan fronted television show Kaun Banega Crorepati 13 has been going on in full swing ever since it started premiering on the small screen. This season of the quiz show has not only been informative, but it is high on the entertainment quotient as well. Starting from November 15th, KBC 13 is celebrating Students Special Week, where students aged eight to 15 have been playing the game hosted by Big B. The Thursday episode on November 19 started with rollover contestant Manas Anil Gaikwad – a 15-year-old student from Lucknow. Manas won Rs. 50 lakh on the show, as he could not answer the question for Rs. 1 crore.
Manas Anil Gaikwad played well and managed to answer the 14th question for prize money of Rs. 50 lakhs. The question that led the young contestant to win the hefty amount was a picture-based one. The question was, “How many brains does this creature have?” The options were five, seven, nine, and twelve. The correct answer was nine. Manav answered it correctly, which led him to the 15th question for Rs. 1 crore. The question that stumped Manav was, “Who is the youngest ever woman gold medalist in the Olympics games, winter or summer? The options were Kim Yun-mi, Marjorie Gestring, Inge Sorensen and Hend Zaza.
Manav did not know the answer to this and hence decided to quit the show. After quitting, host Amitabh Bachchan asked him to make a guess. Manav chose the correct answer as his option, which was, Kim Yun-mi.
After Manas, contestant Vaishnavi Amita Sharma took the hot seat, who will be a rollover contestant in the next episode.