Kaanum Pongal, a muted affair due to Sunday lockdown 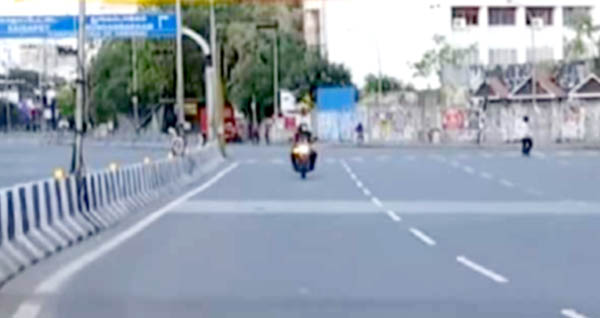 Chennai, Jan 16 (UNI) The Tamil Nadu Government has announced total and complete lockdown on Sundays in view of the rising COVID cases and today it coincided with Kaanum Pongal (sight seeing), marking the end of the four-day Pongal festivities in the State.

But it turned out to be a non-starter for the second straight year as people, who normally throng beaches, amusement parks, Zoos and other tourist places, have to remain in their homes in view of the total lockdown.

Roads wore a deserted look, buses and autos were off the roads and all business and commercial establishments downed their shutters, in view of the complete lockdown.

A bandh like situation prevailed, as apart from public transport services, the Chennai Metro Rail services also did not operate in view of the total lockdown, which was imposed for the second straight Sunday.

The total lockdown was introduced on Sundays for the first time last week after a gap of several months.

However, Southern Railway operated skeletal suburban EMU services for the benefit of those involved in essential services, like doctors, media, civic and healthcare workers.

Ever Since the dawn of the New Year, there has been a rapid increase in the daily caseload, which has inched closer to the 25,000 mark in the State as of yesterday.

The State Capital of Chennai accounted for about 9,000 cases. The neighbouring districts of Kanchipuram, Chengalpet and Tiruvallur also saw a sharp rise in cases as Tamil Nadu has been in the grip of the highly transmissible and fast spreading variant of SARS-CoV-2, posing a tough challenge for the government to contain its spread.

As part of controlling the virus spread, Chief Minister M K Stalin, after holding talks with medical experts and other officials, had imposed night curfew (10.00 p.m. to 5.00 a.m) from January six onwards, while banning public entry into temples, churches, mosques and other places of worship on Fridays, Saturdays and Sundays.

Going a step further, Mr Stalin announced full lockdown on Sundays which as fresh COVID clusters were found in colleges, textile and other shops and marriage and family functions.

Mr Stalin said essential services were exempted from the lockdown, while hotels were allowed to provide takeaways till 10.00 pm.

All those attending competitive and other exams, interviews, those going to airports and railway stations were allowed to travel by showing the necessary documents and tickets.

The government also announced that people could attend marriages and other family functions despite a complete lockdown in force by showing the wedding invitations and that the police department personnel would cooperate with them.

Police have tightened security measures across the state and those found wandering in the streets were strictly warned. More than 10,000 policemen were deployed on security duty in Chennai city.

In Chennai and suburbs, more than 300 check posts were erected and those travelling in two-wheelers and cars were stopped to ascertain the reason for the travel. If there was no valid reason, police seized the vehicles.

The Marina beach front, which would resemble a sea of humanity on Kaanum Pongal day wore a deserted look with the presence of police personnel as part of security duty. Several barricades were erected to prevent people from entering the beach front in view of the lockdown.

Apart from the beach front, the Children’s Park at Guindy, amusement parks like VGP Golden beach, MGM Dizee World and Kishkinda, Maayajaal and the shopping malls wore a deserted look.

The Arignar Anna Zoological Park at suburban, popular called as Vandalur Zoo, has been shut till January 31 in view of the lockdown and the rising COVID cases.