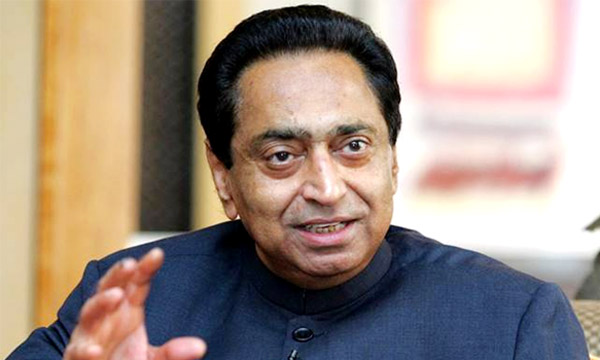 Khilawan Chandrakar, Bhopal
Amidst the speculation about active participation in national politics, the former Chief Minister and PCC Chief Kamal Nath returned to Bhopal on Sunday after the Delhi stay of 4 days. Starting from Monday, he will talk to party leaders and legislators by holding marathon meetings at his residence for four days.
It has once again ended the speculation that Nath could leave Madhya Pradesh. As soon as he reached Bhopal on Sunday, he reached the residence of the Congress leader Late Ishwar Singh Chauhan and Late Durgesh Sharma and paid them his tribute. If the potential third wave of Corona is not fatal, the Election Commission can announce the proposed by-election in the coming days. Political parties have started preparations in the state. Kamal Nath will be deciding candidates for Khandwa Lok Sabha by elections in consultation with senior leaders and party district coordinators. According to information received from party sources, the concerned leaders are being sent separately to join meetings.
State Election Officer has started finalizing the preparations for proposed urban body and Panchayat elections in Madhya Pradesh. In view of this, the Congress has also started preparing for this. It is believed that the State Government will hold the elections of the Municipality, Nagar Panchayat President and Mayor through the indirect system by bringing bill in the forthcoming assembly winter session. In such a case, selecting a winable candidate for all parties will be difficult.

Nath will hold continuous meetings for 4 days regarding the preparations for the by-election. It is being told that in a day or two, Kamal Nath will decide the responsibility of the in-charge of the by-election seat. Regarding the meetings, state Congress vice-president Chandra Prabhas Shekhar says, with the plan with which the Congress won the Damoh by-election, the party will also win the four by-elections to be held in the state under the same plan.
State Congress President Kamal Nath's tour is also going to start soon in the constituencies. Its outline will be prepared in the meeting. The party has given a message to the office bearers of the areas related to the by-election to be active. Former state president Arun Yadav and former minister Sachin Yadav are active in Khandwa Lok Sabha constituency.

Preparation to surround govt
The 42nd winter session of the assembly will be held from August 8 to 11th August. In this session of short period, Congress wants to target the government on many issues. Strategy can be created while discussing the potential issues. Party sources have told that Kamal Nath can churn the idea with senior legislators of the party. Later, calling the Congress legislator party, these issues can be given green signal. As well as the continuous rising prices of essential commodities, the price of petrol diesel, the condition of the deteriorating law and arrangement in the state, the conditions of the deaths of Corona, Dalit and female atrocities and corruption issues can be raised.