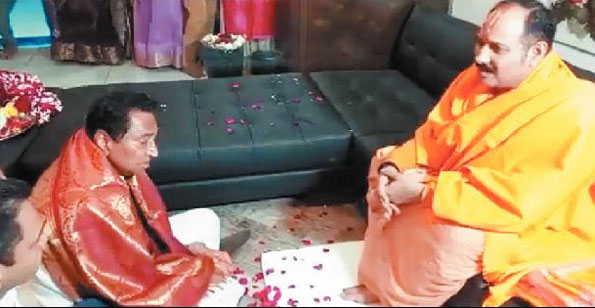 Chronicle Reporter, Bhopal
A video has surfaced of the conversation between former MP Chief Minister Kamal Nath and Pandit Pradeep Mishra regarding Rahul Gandhi's Bharat Jodo Yatra in the state. In this, Kamal Nath is telling Pandit Mishra that we have been dying for 7 days.
The BJP has taken a dig at this video of Kamal Nath. Home Minister Narottam Mishra has told Rahul Gandhi not to drive such people by force.
According to the information, the video is being told of Tuesday i.e. 29 November. Kamal Nath reached the house of Congress MLA Sanjay Shukla in Indore. Pandit Mishra had come here to preach. In the video, Kamal Nath is telling Pt. Pradeep Mishra that it is Rahul Gandhi's rule that he will not walk less than 24 kilometers in a day. Along with him, all of us are also walking in MP since 7 days. The Yatra starts at 6 in the morning. At the very beginning of the video, Kamal Nath says that we have been dying for 7 days. In the video, Kamal Nath's first Pandit Pradeep Mishra is heard saying that it is true that walking so much, meeting everyone, whether it is an ordinary person or a big person, meeting everyone. Meeting the smallest person, this is called doing penance. After this, Kamal Nath is heard saying that he has been dying for 7 days.
Kamal Nath again says that there are only 2 principals, he (Rahul Gandhi) will not walk less than 24 kilometers in a day and secondly, Omkareshwar, the birth place of Tantya Mama and visit of Mahakaleshwar. It was his resolve to go to these 3 places. Rahul had said that even if these three places were to be added to the Yatra, he would stick to the principle of walking 24 kilometers a day.
Minister Sarang also targets
Minister Vishwas Sarang said- The reality has come to the fore. Minister Vishwas Sarang tweeted, Lo Bhai. Now Kamal Nath ji himself has said that we have been dying for 7 days. Some were saying that people themselves are joining this Bharat Jodo Yatra, but the reality has come to the fore. When Congressmen themselves do not want to join this Yatra, then why would anyone join? This trip is a complete flop.
Request to force Rahul, do not make anyone walk forcefully: Home Minister
After the video of the conversation between Pandit Pradeep Mishra and Kamal Nath surfaced, Home Minister Dr. Narottam Mishra has said that he saw Kamal Nath's video. In this you are saying that we are dying for 7 days. I have also heard how he made you join the program on his own terms to visit Tantya Mama, Baba Mahakal's place. Your pain is natural. This is their hypocrisy towards religion and tribe that too is becoming clear from your tongue. I request Rahul Gandhi that people who are physically unwell, should not be forced to drive them in such a way that they have to talk about dying. This event of yours should not prove to be harmful for anyone.