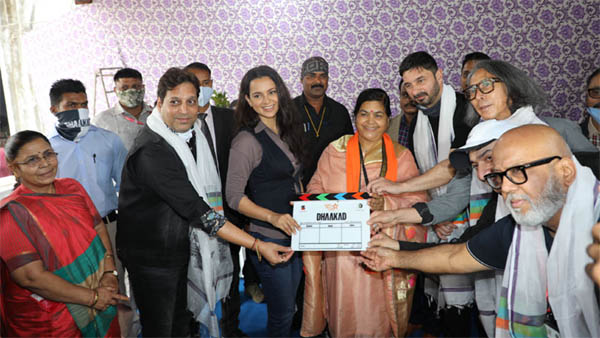 Kangana Ranaut had a busy end to 2020 as she wrapped up shooting for Thalaivi. The actress is now in Bhopal, Madhya Pradesh as she has begun shooting for Dhaakad. However, as per reports, the shoot was met with protests by a political youth group who demanded that the actress go back. Despite this, Kangana is focused to complete the shoot schedule as she will be filming her action scenes.

Speaking about her experience in shooting in MP and meeting Chief Minister Shivraj Singh Chouhan, Kangana told ANI, "This is the third film I am shooting in Madhya Pradesh. Earlier, I have done the shooting of Panga and Manikarnika in MP. I am fortunate to coming back to Madhya Pradesh frequently. I also met mama ji (MP CM) and he encouraged us. I felt like I was meeting a member of my family. He encouraged us for women empowerment and guided us."

Kangana, who fights against child trafficking and women exploitation in the film, also added that the state's CM might declare Dhaakad tax-free.

"He also complained us we are not portraying the potential of Indian women in movies. We took notes. He has implemented several schemes for girls. He assured us that his team will look into it and he might declare it tax free in the state. He has assured full cooperation and we are grateful to him," Kangana added. The actress had also tweeted about her meeting with CM Shivraj Singh Chouhan.