Kangana Ranaut reveals how she shot in the coal mines of Madhya Pradesh for 'Dhaakad' on The Kapil Sharma Show! 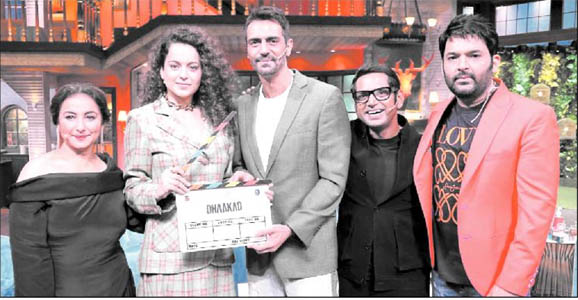 Promoting the action thriller 'Dhaakad', Kangana Ranaut who plays a no mercy spy and assassin in the film, graced the sets of Sony Entertainment Television's The Kapil Sharma Show along with her co-stars Divya Dutta, Arjun Rampal, Sharib Hashmi and director Razneesh Ghai. The actress spoke about the film, the director's love for female-centric action movies and how after shooting for an action sequence in a coal mine, she had soot all over herself!
Host Kapil Sharma quirkily asked his guest, Kangana, why she chose to do an action film to which she said, "The whole credit of the film goes to the director Razi Ghai (Razneesh Ghai) because being an audience member himself, he likes watching female-centric spy thrillers and so he made a film like that for his audience. I am very thankful, very grateful and I am always ready to do work like this which requires me to do action sequences."
She further spoke about the location where they shot the action sequence, "we shot in a coal mine and our lungs were filled with soot! it was coming out of our nostrils! We shot internationally as well as locally in India. We shot in Singrauli, Madhya Pradesh. Our director shot in the harshest terrains!"
Lastly, talking about the film Kangana spoke about how audiences have mostly watched action thrillers led by men but now in 'Dhaakad', a woman would be breaking bones and blazing guns.