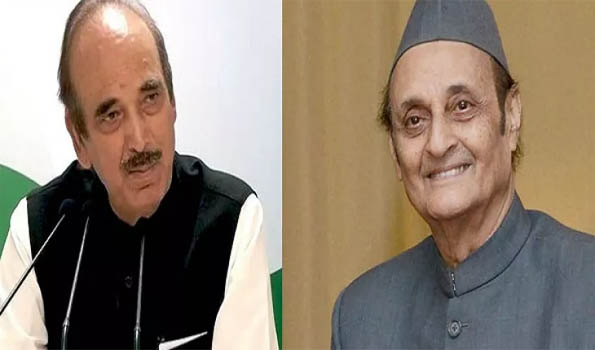 New Delhi, Jan 27 (UNI) Amid fissures in the Congress over the Padma Bhushan being conferred on Ghulam Nabi Azad, senior leader Dr Karan Singh on Thursday came out in his support and said he was "distressed" over the unseemly controversy over the "well deserved award" to Azad. In a statement, Dr Karan Singh said: "If one of our colleagues is honoured. he should be greeted with appreciation rather than snide remarks." He went further said "these National Awards should not become a subject of inter-party controversy, far less of intra-party ones" and added that he has known the former Jammu and Kashmir Chief Minister for half a century. "I have seen him rise through sheer dint of hard work, dedication and administrative ability to becoming a Cabinet Minister, both with P V Narasimha Rao and Dr Manmohan Singh," he said. Dr Karan Singh also recalled Azad's contribution as Leader of the Opposition in the Rajya Sabha for seven years and said "he played a positive and constructive role in our Parliamentary system". Azad was one of 23 Congress leaders critical of the party leadership and sought an overhaul of the party organisation. Azad himself said: "These awards are national awards and not from any particular party." Reacting over the Padma Bhushan to Azad, Congress leader Jairam Ramesh remarked when former West Bengal Chief Minister Buddhadeb Bhattacharya rejected the Padma Bhushan awarded to him: "Right thing to do. He wants to be Azad not Ghulam." Congress leader Kapil Sibal congratulated Azad on getting the honour. "Ironic that the Congress doesn't need his services when the nation recognises his contributions to public life."