Karbi Anglong peace accord signed, HM says ready to welcome insurgents who give up arms 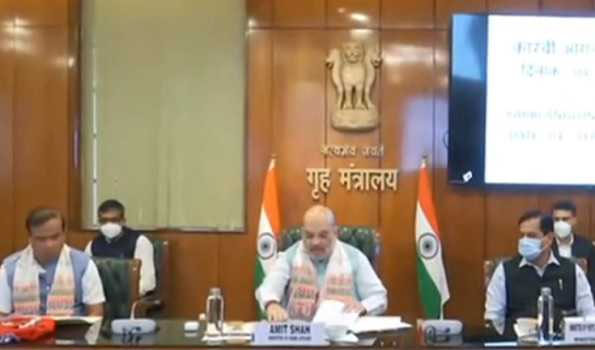 New Delhi, Sep 4 (UNI) A peace accord was signed between insurgent groups from Karbi Anglong district of Assam, and the state government was signed in the presence of Home Minister Amit Shah on Saturday, bringing an end to the decades long agitation.

Representatives from all insurgent outfits were present, along with Assam Chief Minister Himanta Biswa Sarma and Union Minister Sarbananda Sonowal.

The Home Minister said over 1,000 cadre of the insurgent groups surrendered their arms as the peace accord was signed.

Speaking after the accord was signed, Shah said the government is committed to keeping all promises made in the accord, and for rehabilitation of the surrendered cadre. He also said the Narendra Modi government will welcome any insurgents who want to give up arms and join the mainstream.

"This is a historic accord that has just been signed. This will be a golden day in the history of Assam," Shah said.

"Government of Assam and government of India are committed to keeping all the promises made in the accord. It is our policy to welcome anyone who wants to give up arms and join the mainstream. This is the reason why we are bringing end to all the problems that we inherited from the previous governments," Shah said.

Assam Chief Minister, meanwhile, said the Karbi Anglong agitation had as much mass support as the Assam agitation, and lauded the accord being signed.

Earlier in the day, at an event the Home Minister had said over 3,700 insurgents have surrendered arms in the North East in last two years.