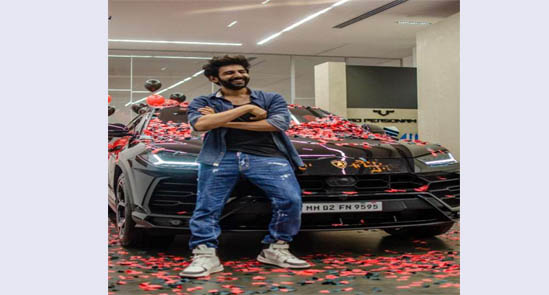 Kartik Aaryan made his first appearance after he tested negative for the virus. The actor was under home quarantine when he announced that he tested positive for COVID 19 and was taking all the safety precautions. Kartik stepped out and was seen with his newly purchased swanky car. The actor has bought a Lamborghini worth Rs 4.5 Crore. Kartik Aaryan, who is gearing up for his next release Dhamaka, made sure that he was wearing a mask. He was all smiles as he drove his car.
Kartik Aaryan kept it very simple and cool as he got snapped by shutterbugs. He was seen wearing blue jeans with a black t-shirt and a denim shirt. As he posed for the camera, the actor was beaming with joy with his new addition. As reported, this swanky four-wheeler had to be airlifted from Italy as Kartik couldn’t wait. Sources reveal that Kartik paid an extra half a crore only to get the car. The luxurious car is known for its best interior, silhouette and jaw-dropping top speed of 305 kmph.
Yesterday, Kartik wrote on Twitter, "Negative Heavy 14 din ka vanvaas khatam Back to work." On the work front, Kartika Aaryan was shooting for Bhool Bhulaiyaa 2 when he was diagnosed with COVID 19. The film also has Kiara Advani and Tabu. The film is slated to release on November 19, 2021. Meanwhile, he will be next seen in Ram Madhvani’s Dhamaka that will have a digital release and Collin D'Cunha’s Dostana 2.