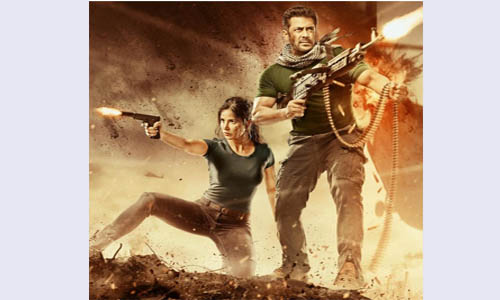 On Tuesday evening, Katrina Kaif took to the social media to announce that she has tested positive to coronavirus. The development resulted in fans and media getting concerned about her health with some even speculating about the fate of the action-packed spy thriller, Tiger 3, which is currently on floors in Mumbai. For those not aware, Salman Khan along with Katrina has been shooting for T3 since March 8. We have exclusively learnt that the shoot of this Maneesh Sharma directorial is continuing as planned with Salman Khan at Yash Raj Studios in Mumbai.
“Katrina shot for Tiger 3 a week back and is scheduled to join again from the end of April for a few days. This was always a part of the original shooting plan of the film, so there is no delay in the shoot of Tiger 3. Right now, Salman is finishing his solo portions with Maneesh and the shoot is going on in full swing” revealed a trade source, adding further that all Covid-19 protocol have been strict followed in the premises of Yash Raj Studios.
"Katrina shot for Tiger 3 a week back and is scheduled to join again from the end of April for a few days. She always had this break in the first schedule of the film"
“From constant sanitisation, to compulsory mask and Covid-test at regular interval for the cast and crew, Aditya Chopra is following strict measures on the set to be safe and avoid any sort of lapse. All the sets and equipment’s are also sanitised multiple times to curb the possibility of virus spread. All the govt. prescribed guidelines are being strictly adhered to on the sets,” the source added. Apart from Tiger 3, another mega budget action film, Pathan with Shah Rukh Khan, John Abraham and Deepika Padukone is being shot at present in the studio and same covid-protocols are being followed on that set too.
Tiger 3 features Emraan Hashmi as the antagonist, however, details of his character has been kept under complete wraps for now. The first part of the franchise was helmed by Kabir Khan in 2012, followed by Ali Abbas Zafar in 2017 and now, Maneesh Sharma in 2021. Interestingly, the previous two parts were humongous blockbusters upon their release, and the same is expected from the third instalment of the franchise too, which is said to be the biggest action film of Bollywood. Stay tuned to Pinkvilla for more such news.