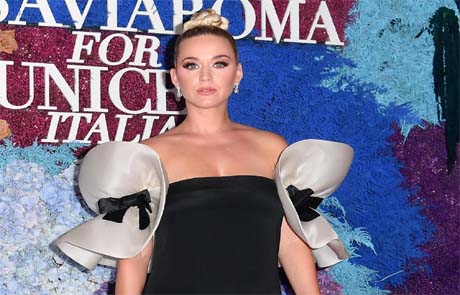 Katy Perry and Orlando Bloom's daughter Daisy Dove is already a talker as a one-year-old and it looks like she is her mother's biggest fan too. Recently, Perry was honoured at Variety's Power of Women event where she also spoke about her little one and all her cute antics. While talking to Entertainment Tonight, Katy revealed how her daughter has picked up one word and it's currently her favourite.
While revealing how her little one is talking, Perry told ET how her daughter's favourite word has become "Gato" which means cat in Spanish. The singer said, "She is talking, but she thinks everything is a cat ... When a person will walk in she will say 'Hi, gato! I don't know why she is so fascinated with cats."
Well, let's not forget that Perry who is one of the most famous pop singers today is a cat lady herself and more than that, has a huge fan base who refer to themselves as Katy Cats. We sure know from where little Daisy has picked up this cat obsession.
Perry who has noted this similarity herself also further quipped, "It's wild (because) people who love my music, they call themselves Katy Cats. She doesn't know anything about that, she doesn't care about any of that, but for some reason the major word in her life is gato. It feels like destiny", via ET.
Recently, as Katy got honoured for her work with the Firework Foundation at the Power of Women event, she delivered an emotional speech where she also sent out a special message to her daughter calling her "future powerful woman." A teary-eyed Katy noted that she wants her daughter to never be afraid to dream.