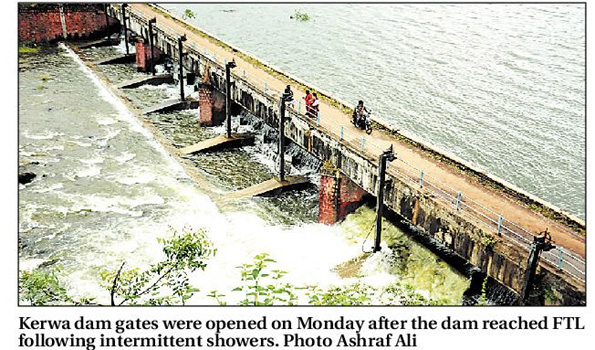 Chronicle Reporter, Bhopal
For the past few days, intermittent rain continues in the capital Bhopal and adjoining areas. Due to this the water level in the rivers and ponds has increased. The capital's Kerwa Dam was also flooded with water and by Monday afternoon its gates were opened after it reached FTL. At present, 1672.11 feet of water has come in this dam. This is the full tank level of this dam. A large number of tourists have been arriving since afternoon to visit the dam.
About 5 cm of rainfall has occurred in Bhopal in the last 48 hours. Due to this, many areas were flooded, while the people faced problems due to the power outages throughout the night. Bhopal received the third highest rainfall in the last 10 years, compared to 7.5 cm in 2016 and 13 cm in 2019.
The Southwest Monsoon generally departs from Bhopal in the last week of September. In comparison to September, the days are hotter and the nights colder in this month. Mainly in the Bay of Bengal, the cyclonic storm crosses the Andhra coast and causes occasional rains in Bhopal. The days remain sultry.
It has been raining in Bhopal for the last two days. Meteorologist Ved Prakash Singh said that there is a possibility of rain in Bhopal and its surrounding areas during the next 24 hours. The wind can also move at a speed of 50 km per hour.
Due to the incessant rains for the last 24 hours, there was a water logging situation in many areas of the city, while there was power failure in many places. In such a situation, people suffered a lot. Ashoka Garden, Aishbagh, Nishatpura, Bajaria, Kolar and Chola Mandir areas suffered the most. There were complaints of traffic jams and power outages due to water logging on the roads.

Rain recorded in 13 dists: According to Weather Department light rain and drizzling can be witnessed in 13 districts including Umaria, Mandla, Balaghat, Seoni, Dindori, Sheopurkala, Shivpuri, Betul, Burhanpur, Rajgarh and Guna. Weather Department said that rain system has been reacted in few parts of state due to changes in Bay of Bengal. They said, light rain activities will be continued in state for new two to three days