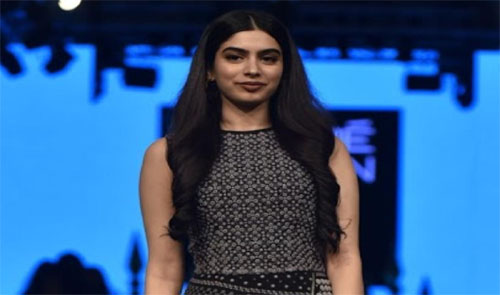 On Saturday, star kid Khushi Kapoor took to her Instagram space to upload a slew of stunning photographs from her recent photoshoot. As soon as the pictures caught the attention of her best friends Navya Naveli Nanda and Shanaya Kapoor went all hearts for it.
The new-gen star kid Khushi Kapoor is an active social media user. Daughter of famous producer Boney Kapoor and late actor Sridevi, often takes to her Instagram profile to share stunning photographs of herself among her fan army. On Saturday, July 17, Khushi was seen doing the same. She dropped a series of new pictures from her recent photoshoot and fans are loving it. Donning a monochrome outfit, the celebrity kid was spotted striking power poses that did not only impress her followers but also left her best friends mind-blown.
In the photos shared by her, Khushi Kapoor aces her fashion game in a taupe shade pantsuit. Topped over a matching bralette, her ‘power suit’ look was kept simple yet elegant with minimalistic accessories. Khushi Kapoor seems to have a thing for minimalism and following the same, the diva also kept her makeup undertoned. In one photo, Khushi plays with her sleek hair as she relaxes on a chair, in another, she gazes away from the camera.
As soon as the pictures surfaced on the photo-sharing application, celebs quickly responded to it complimenting Khushi. Best friend Navya Naveli Nanda and sister Shanaya Kapoor dropped red heart emoticons on the post, meanwhile, Anshula Kapoor wrote, "Loveee." Shanaya’s father Sanjay Kapoor also joined the bandwagon showcasing his love while wife Maheep Kapoor said, "Faaabbbb." Talking about Khushi Kapoor’s work front, the star kid also aspires to be an actor just like her elder sister Janhvi Kapoor. However, details of her Bollywood debut yet remains unclear.