Kiara Advani opens up on onscreen chemistry with Sidharth Malhotra 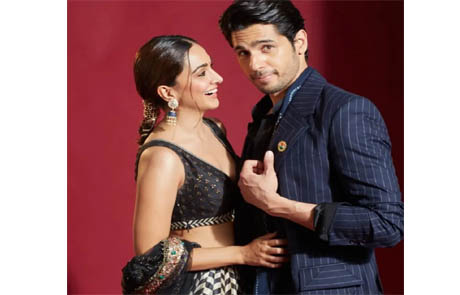 Even though the pandemic restricted many actors from entertaining us, Kiara Advani starred in films like Laxmmi and Shershaah. The OTT releases saw Kiara essaying different characters and winning hearts. In a recent interview with ETimes, the actress got candid about her films and friends.
Kiara, who is rumoured to be dating her onscreen co-star Sidharth Malhotra, has multiple times fielded questions about her love life. When asked about how she and Sidharth created magic onscreen with their chemistry in Shershaah, Kiara said, "Honestly, you can’t create chemistry or anything like that. It's always in the scene, in the story and what’s written. No two actors can just go and create something that's not on paper and that's not being shot, for the audience to feel that way."
The actress was all praise for her rumoured boyfriend as she called him a wonderful actor. "What Sid and I portrayed was what happened in their lives. Had she (Dimple) not shared her story and had we not known about their relationship through Vikram’s family, we would not have been able to recreate that. The fact that it’s a true story makes it all the more special. Somewhere both of us can say that we acted really well (laughs). Sid’s a wonderful co-star and a wonderful actor so that just makes it easier to work with someone like that," Kiara remarked.
Earlier, Kiara has also called Sidharth as one of her "closest friends". When asked about their equation, Kiara revealed, "I think I can actually count my friends on my fingertips. If I'm friends with someone, then, as a Leo, I'm a very loyal friend. I value all my friendships be it with Sid or be it with anyone else. Whether those friends are from the industry or from my world outside of it. I hold my friends close to my heart and I make time for them and I like doing that."