Kiara Advani would love to meet her lookalike Aishwarya Singh 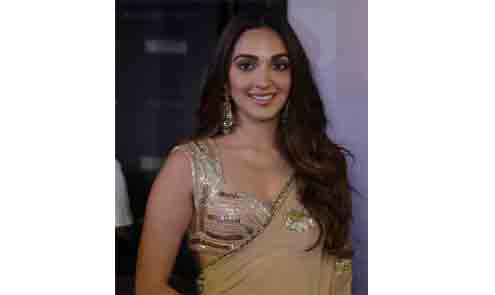 In September this year, dentist and social media influencer Aishwarya Singh had recreated Kiara Advani’s look from Shershaah, which had gone viral on the internet. Now, in an exclusive conversation with Pinkvilla, Advani opened up on the same. Interestingly the actress had even commented on Aishwarya’s post. “I think she looks like herself, and is a beautiful girl, who is beautiful as herself,” says Kiara.
She further adds, “I don’t think we should be calling her a lookalike, or doppelganger. I don’t like that word. I think she is beautiful as herself, and I love that she has recreated the look so well. But she is her own person and she should be her own person.” Reportedly, Aishwarya even wanted to meet Kiara. Reacting to that, Advani states, “I would absolutely love to (meet her), and hopefully maybe we will.”
Meanwhile, on the work front, Kiara has many interesting films lined up, including Jug Jugg Jeeyo, Mr Lele, reportedly there is one with Ram Charan and the other with Ranveer Singh, and another one has been speculated with Kartik Aaryan as well. “I feel very grateful that the films I am doing are all different, interesting, they are very exciting collaborations as well, wonderful stories, and it is definitely an exciting time. I don’t think I have the time to pinch myself, it’s that exciting sometimes. I would love to speak more, but I can’t confirm all the ones you said till they are all announced. Though yes, the ones that are announced I am excited for them. That’s the most I can see at this point. We have not announced release dates as yet, we are still in the process of completing the films and once that happens there will be so much more to talk about,” shares Kiara.