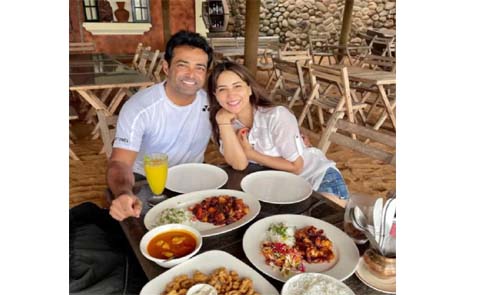 Kim Sharma has been hitting the headlines of late for her rumoured relationship with Leander Paes. The rumours started escalating after their vacation pictures from Goa went viral. The duo had a great time together while vacationing at the beach. After returning from their holiday, on Sunday, Kim Sharma and tennis player Leander Paes were spotted together taking a stroll in Mumbai. They were seen walking on the streets with the actress’ dog. The camera went clickety-click, soon after Kim and Paes were spotted.
In the pictures that quickly went viral, Kim could be seen wearing a white and pink maxi dress, while Leander was casually dressed in a white T-shirt and shorts. In some of the pictures, the duo was seen walking hand-in-hand thus igniting dating rumours. Photographs of Kim and Leander’s outing were widely shared online. Last month, a restaurant-bar in Goa sparked rumours of Kim and Leander dating by sharing a picture of them enjoying a meal together. Another photo showed him hugging her from behind as they posed on the beach.
Recently, Kim’s ex-boyfriend Harshvardhan Rane also spoke about her rumoured relationship with Leander and told a leading daily, “I have no knowledge. It would be respectful if confirmed by them, but if true, that’s the hottest couple in town.”
Kim and Harshvardhan were earlier dating for a brief period. The couple never officially spoke about their breakup. The reason behind the split is still unknown.