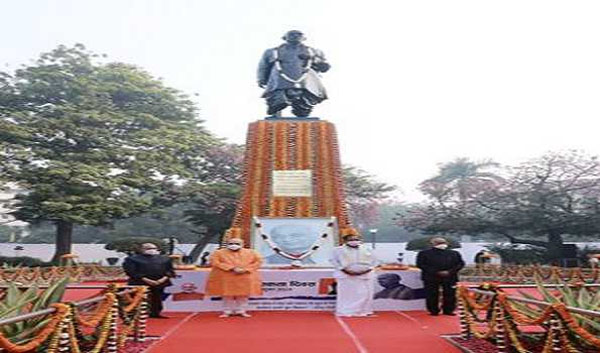 New Delhi, Oct 31 (UNI) President Ram Nath Kovind, Vice President M Venkaiah Naidu, Union Home Minister Amit Shah and Delhi Lieutenant Governor Anil Baijal paid homage to the country's First Deputy Prime Minister and Home Minister Sardar Vallabhbhai Patel on his birth anniversary here on Saturday.
Mr Kovind, Mr Naidu, Mr Shah and Mr Baijal reached the statue of Sardar Patel at Patel Chowk at half-past eight in the morning and paid tribute to him on his 145th birth anniversary. The birth anniversary of Sardar Patel is celebrated across the country as National Unity Day.
After paying his tribute to Patel's statue with flowers, Shri Shah administered the oath to the people and countrymen present there to maintain national unity and integrity. He also called upon the people to take a pledge to maintain the internal security of the country.
Unity races were also organized every year on this occasion, but this time due to Corona epidemic, this race could not be organized in the capital Delhi.
Prime Minister Narendra Modi this morning visited Sardar Patel's Statue of Unity in Kevadia, Gujarat to pay his tributes and administer the oath of national unity to the countrymen. He will also observe the unity day parade.